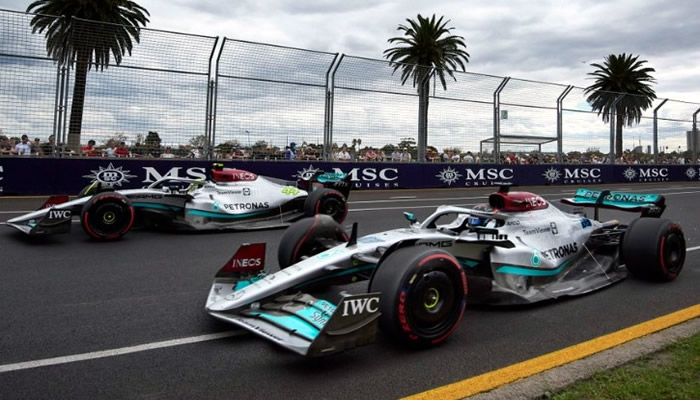 For the first time since the 2012 Japanese Grand Prix, both Mercedes drivers have today, Friday, April 22, failed to qualify in the top ten from Q2. In a very poor showing, Lewis Hamilton and George Russell found themselves seriously short of pace.

The drivers were in Imola taking part in the qualifying laps to establish grid positions for this season’s first sprint race in the Italian Emilia Romagna Grand Prix. A session hit by sporadic downpours of rain caused all sorts of mayhem, with the red flag produced an incredible five times.

Hamilton will now start from 13th tomorrow, Saturday 23, while Russell will be two grid positions in front, in 11th. Max Verstappen clinched pole in the Red Bull, an impressive 0.8 seconds faster than Ferrari’s Charles LeClerc. Britain’s Norris Lando will start third, with Kevin Magnussen putting his Haas into a superb fourth.

“It was tricky out there with the dry/rain. It was very slippery. It was hectic, a long qualifying, but of course, in the end, happy to be here. It is an amazing track and it really punishes you if you make a mistake”, commented the Dutch driver after the session finished.

“Our first three races in general didn’t go to plan but we will try to have a good weekend here”, Verstappen added, referencing the fact that he had failed to finish in two of the three races so far this season.

Carlos Sainz crashed his Ferrari at Rivazza, causing a red flag, and as a result, he will start from tenth for the sprint tomorrow. Points will be awarded this season to the top eight finishers in the sprint, with the winner receiving eight points. The result of the sprint will then determine grid positions for Sunday’s Italian GP.

Spain’s Fernando Alonso had a great result to claim fifth position for tomorrow’s start, just ahead of Daniel Ricciardo in the McLaren. Sergio Perez placed the second Red Bull seventh, Valtteri Bottas will start eighth in the Alfa Romeo, with the Aston Martin of Sebastian Vettel ninth.