UPDATE: Two arrested in connection with bus robbery at gunpoint in Granada 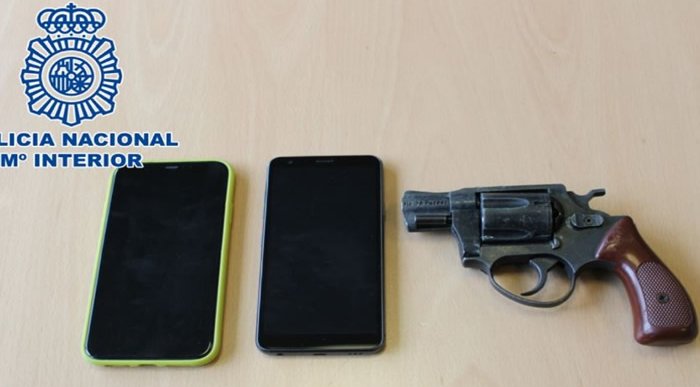 Photo of the weapons confiscated by the police. Image: Policia Nacional

As the result of their investigation into an incident on a public bus in the city of Granada last Monday, April 18, the National Police has reported the arrest of two individuals on Friday 22. Both are Spanish nationals, aged 18 and 28.

The two detainees have criminal records, as the main perpetrators of at least five robberies with violence and intimidation using a firearm and knives, carried out in the neighbourhood of La Paz since the end of February.

During the arrest, officers also uncovered a firearm, specifically a revolver, as well as two mobile phones, one of which belongs to the first victim of these incidents. New arrests are not being ruled out, as the investigation continues into other robberies.

An investigation had been launched at the end of last February when the first robbery was reported. In this crime, the victim was assaulted by two men while walking at dawn through the neighbourhood of La Paz. They allegedly intimidated her with a firearm and a knife to steal the valuables that she was wearing,

Subsequently, in the months of March and April, four more robberies were reported. The police established a pattern of action followed by the assailants. These robberies all involved the use of a firearm and knives, and were normally perpetrated at dawn, in a time slot that was set between four and seven, in very narrow streets.

It came to light that before Monday’s incident on the bus, these two men had approached a couple and threatened them with a gun and a knife. They stole the couple’s money and mobile phones.

When the robbery occurred on the bus, investigators learned of the presence of two other individuals who waited in a vehicle outside the bus, ready for the other criminal to escape from the bus quickly.

Friday’s arrests were the climax of the investigations conducted by the National Police detectives. One of the detainees was found to have an outstanding judicial summons against him from a court in Palma de Mallorca for a crime of domestic abuse. They have been handed over to the judicial authorities, as reported by granadadigital.es.

The National Police in Granada city is today, Monday, April 18, investigating an incident that occurred on a public bus on the Line 5 route. An individual reportedly held up the bus and its passengers at gunpoint early this morning, before escaping.

As reported by Ideal, and confirmed by granadadigital.es, this man entered the bus as a passenger while it was in the northern part of the city route. He subsequently produced a firearm and assaulted both the bus driver and a female passenger.

According to sources from the National Police, as reported to EFE, the incident took place in Calle Caseria del Cerro, at around 7am. The same sources assured that there were no injuries to any of the people on board the bus. It is believed that despite being armed with a gun, the thief escaped with only around €40.

He has currently avoided a police operation that was launched after the robbery. After exiting the bus, the robber escaped in a vehicle that was waiting for him, which contained two occupants.

Following the robbery, the bus passengers vacated the bus and continued their journey on a replacement bus.