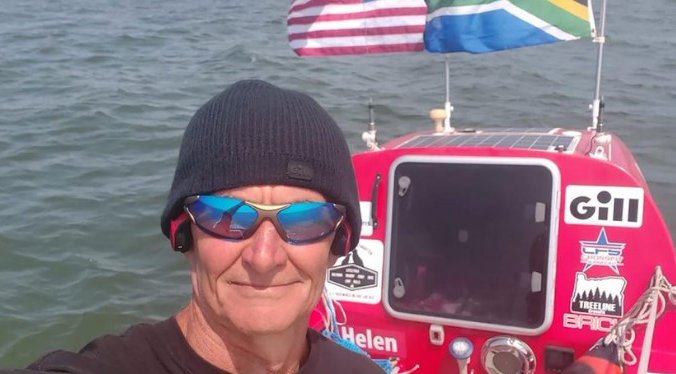 Photo of Peter Harley and his boat. Credit: [email protected]

Peter Harley, a 61-year-old, originally from South Africa, is about to embark on a solo crossing of the Atlantic Ocean in a rowing boat. He plans to sail from Virginia Beach in the US, 4,000 miles to La Trinite-sur-Mer, on the Brittany coast of France, according to CNN.

This will be his second attempt at a crossing that has never been achieved by a solo rower. If he completes the trip then it will be a new record. It is a hazardous journey that he estimates will take him at least three months to complete in his 24-foot boat.

Mr Harley, who moved to America in 2019, told CNN, “I’m not nervous, I’ve been in boats at sea in South Africa for many years, so I kind of know what’s coming, and I’m not afraid of it”.

Having failed on a previous occasion, the sailor is not giving in, and has been in training for just over one year, to prepare his body and mind for what lies ahead. Eight months ago Mr Harley said he changed his complete eating habits, to give his stomach time to adjust to a very different daily routine once at sea.

His vessel has storage space where he will keep his oatmeal, pasta, and protein bars. There is a cabin for sleeping, and solar panels, with which he hopes to be able to keep in contact with his family. “The bathroom, I’m afraid, is just a bucket”, he joked. A desalinator will enable him to purify the saltwater into drinking water.

“Preparation for the trans-Atlantic journey has been no joke: 28 months of training, 13 of which were 7 days a week”, he explained to CNN. Adding, “It requires a tremendous amount of discipline, dedication, and focus”. His Atlantic crossing will alo help to raise money for the environmental organisation 5 Gyres, as reported by geo.tv.