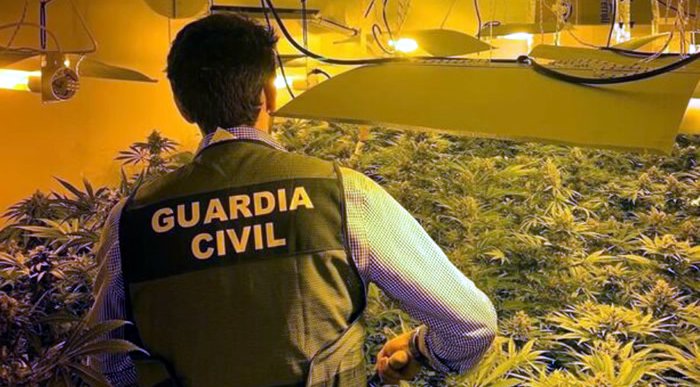 As reported this Sunday, May 1, in a press release, Guardia Civil officers have carried out three operations against marijuana trafficking in the province of Granada. These raids in the municipalities of Rubite, Loja and Ugijar, resulted in the seizure of 1,434 cannabis sativa plants.

‘Operation Oca5’ first discovered a cannabis sativa plantation in a greenhouse in the municipality of Rubite. It contained 880 plants in an advanced stage of growth, which were subsequently confiscated.

A 58-year-old man and a 45-year-old woman, both with police records for similar events, were arrested as the owners of the greenhouse. Last year, they had also been arrested by the Guardia Civil for growing more than a thousand cannabis sativa plants in that same greenhouse.

The operation was launched as the result of investigations previously carried out by officers from the Castell de Ferro post. They became suspicious that the owners of the farmhouse in the municipality of Rubite had replanted cannabis sativa in their greenhouse.

Within the framework of ‘Operation Trantor’, a large-scale marijuana production centre was uncovered in a property on Calle Don Bernardino, in the town of Loja. Together with technicians from Endesa, an illegal electricity connection was also found. In this operation, 456 cannabis sativa plants in an advanced state of growth were seized by the Guardia Civil.

Three individuals were brought to justice for a crime against public health, drug cultivation, and electricity fraud.

Finally, in the municipality of Ugijar, officers discovered another illegal connection to the electrical network in a house. Its owner, an individual with numerous police records, was found to be cultivating cannabis sativa. Authorisation had been requested from the Orgiva Court to make a search of the home, and inside they discovered 98 plants in the stage of very advanced flowering, as reported by granadahoy.com.