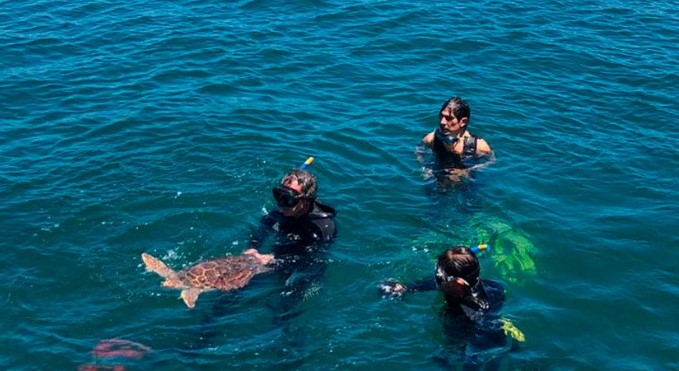 Two young loggerhead turtles have been released back into the sea by Malaga’s Aula del Mar Crema centre.

Two young loggerhead turtles (caretta caretta species) were released into the sea on the morning of Monday, June 6. They had been in the safe hands of the Aula del Mar de Malaga and its Centre for the Recovery of Endangered Marine Species (Crema) since June 2019, and May 2021, respectively.

Five divers were in charge of releasing both specimens, at a distance of two miles out from the coast. The turtles had been recovering at the Crema facilities after originally being located by two swimmers. One was found less than 100 metres from the coast, and the other one was right on the shore.

The first of the pair arrived at Crema in June 2019. It weighed just four kilos and had barnacles all over its skin. Professionals at the centre administered a course of antibiotics, eliminated the barnacles, and began to heal the wounds caused by these crustaceans, according to malagahoy.es.

She was going to be released the following summer as she had recovered, but then the centre detected that the turtle had conjunctivitis. The reptile got better, but in winter she got sick again. Today, she is once again strong, and in perfect condition.

In May of last year, the second specimen arrived at the Aula del Mar. In a first examination, Crema detected that the animal, weighing 14 kilos, was dehydrated, thin, had algae on its shell and was persistently buoyant in the water.

They also observed that the loggerhead turtle defecated remains of plastic material. After a few months of antibiotic therapy and fluid therapy, he regained his strength.

Juan Antonio Lopez, the president of the Aula del Mar, assured that these turtles have survived and recovered thanks to human action that “in this case has been beneficial for them”. He explained that in the near future these specimens “can be reproducers, and ensure that the populations are maintained”.