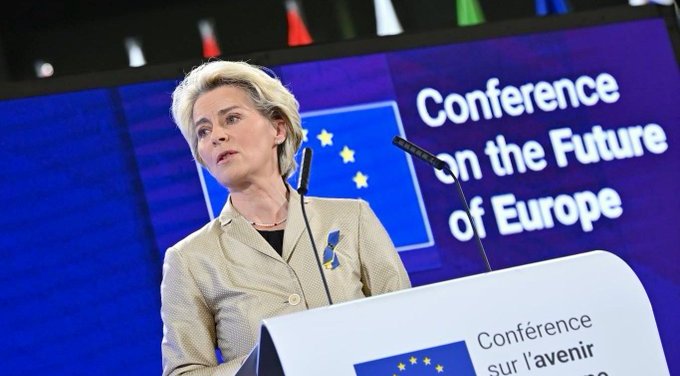 The President of the EU Commission has addressed the Ukrainian Parliament following the Council’s decision to grant the country candidate status.

Speaking on July 1, von der Leyen congratulated the Ukranian Parliament on submitting its application only days after it was invaded by Russia, saying it was “a courageous effort under difficult conditions.”

She said that the ability to provide all the required information whilst working to defend the country was a testament to how far the country had come. She added that it was even more of a testament that Ukraine had continued to keep parliament open and full functioning throughout the invasion.

She continued saying: “You have come such a long way since 2014. You have chosen firmly to be a democracy and to live under the rule of law. This choice, Ukraine has already made for itself, for its own sake. Mr President, you once told me that everything that Ukraine would do for EU membership it would do anyway. Because that is the modern and prosperous Ukraine you want it to be. The next steps are within your reach. But they will require hard work, determination and above all unity of purpose.”

Referring to the rule of law she commended the government on its work to rid the country of corruption, creating an impressive anti-corruption machine. But she said: “there is more to be done.”

Von der Leyen commended President Zelenskyy and his colleagues for their legislation to break the oligarchs’ grip on economic and political life, a first in Europe.

Saying she believes in the country von der Leyen said that reform takes time but that “Your resolve. Your passion for Europe. Your desire to live the European dream in your beautiful country,” will see the country achieve membership in time.

The full address by EU Commission President von der Leyen to the Ukrainian Parliament can be read below.

Members of the government,

Honourable Members of the Rada,

Duzhe dyakuyu, thank you so much for inviting me to address this special session. Just days ago, on Constitution Day, President Zelenskyy, you said that your ‘victory is not far off’. Of course, Putin’s army is still killing your brothers and sisters. They continue occupying your land, stealing your grain and bombing your cities. You are fighting back bravely. And Europe will stand up with Ukraine as long as it takes. We will not rest until you prevail.

Your brave soldiers on the frontline are making ultimate sacrifices to defend the soil of Ukraine and its people. And behind the lines, there are countless other Ukrainians working to support this national endeavour. And they all hope for a brighter future for their country. This is a courageous generation, on the march towards their vision. Their vision of a free Ukraine that is part of a democratic Europe. I have them clearly in my mind as I speak to you today. You have kept your state and your democracy up and running against all odds. I saw it with my own eyes, after taking the train to Kyiv twice since the beginning of the war. You have kept the Parliament open even in the darkest days, when bombs fell on Kyiv and you had to build barricades to protect the Rada.

Ukraine filed its application for membership in the European Union only days after the Russian invasion. And you managed to provide us with all the necessary information to put forward a strong opinion. We in the European institutions worked day and night to support you. But it is your effort that got the work done. You mobilised not only your institutions, but the best energies in your country. You reached out to thousands of experts from civil society and academia, to showcase everything Ukraine has achieved since the Revolution of Dignity. And because of this effort, you have gained the endorsement and the respect of all EU Member States. This is a significant sign of trust. Ukraine now has a clear European perspective and it is candidate to join the European Union, Something that seemed almost unimaginable just five months ago. So today is first and foremost a moment to celebrate this historic milestone. A victory of determination and resolve. And a victory for the whole movement that started eight years ago on the Maidan.

You have come such a long way since 2014. You have chosen firmly to be a democracy and to live under the rule of law. This choice, Ukraine has already made for itself, for its own sake. Mr President, you once told me that everything that Ukraine would do for EU membership it would do anyway. Because that is the modern and prosperous Ukraine you want it to be. The next steps are within your reach. But they will require hard work, determination and above all unity of purpose.

Today, the international community is mobilising to support your efforts to rebuild your beautiful country. Next Monday, together with President Zelenskyy and Prime Minister Shmyhal, I will participate in the Lugano conference for the reconstruction of Ukraine. Your European path and the reconstruction of the country will go hand in hand. Ukraine will be in the lead. Massive investments will have to come. But to maximise their impact and to foster business confidence, investments will have to be coupled with a new wave of reforms.

You have determined your reform agenda and you have already made important progress. Take the fight against corruption. Preventing and combatting corruption has been particularly high on your agenda since the Revolution of Dignity. You have created an impressive anti-corruption machine. But now these institutions need teeth, and the right people in senior posts. The new head of the Specialised Anti-Corruption Prosecutor´s Office and the new director of the National Anti-Corruption Bureau of Ukraine should be appointed as soon as possible. Or take your plans to reform the Constitutional Court. Legislation is needed for selection procedures for judges, in line with the recommendations of the Venice Commission. Institutions must come to life, so that they can deliver on the aspirations of your people. Or think about the excessive influence of oligarchs on the economy. Today, Ukraine is the only country in Europe’s Eastern Partnership to have adopted a law to break the oligarchs’ grip on your economic and political life.  And I commend you for that. Now you have to focus on the implementation of this law in a legally sound manner, taking into account the forthcoming opinion of the Venice Commission. A media law should also be adopted, one that aligns Ukraine’s legislation with current EU standards and empowers the independent media regulator. In sum, many of the laws and the institutions you need are already in place. Now is the time to translate rules and bodies into positive and enduring change.

Of course, reforms always take time. That is how all our democracies work. They need constant commitment and dedication. And for instance, no one expects Ukraine to fill in all posts in your new institutions while so many of your best and brightest are fighting on the front. But Ukraine’s democracy must be kept on the right track. You have already shown that you can pass important laws even as the war still rages on, and make every day count.

You know the work that lies ahead better than anyone else. The word Rada means council, and council means collective wisdom. I am confident that you will put your collective wisdom at the service of Ukraine, when it comes to reforms and to the future of your country. So today, I come here with a very simple message. There is a long road ahead but Europe will be at your side every step of the way, for as long as it takes, from these dark days of war until the moment you cross the door that leads into our European Union.

I believe in Ukraine’s European future. And the reason is simple. The reason is the tenacity of the Ukrainian people. Your resolve. Your passion for Europe. Your desire to live the European dream in your beautiful country. As President Zelenskyy said in his first speech in front of this parliament: ‘Europe is not somewhere else. Europe is here, in your mind. And when Europe is in your mind, then Europe will come to your country too.’ It is your country. It is your future. And only you can make it happen. You are the ones who can change this country for good. And this will be your ultimate victory. A free, prosperous and vibrant Ukraine. A sovereign Ukraine that is finally reunited with our European family.