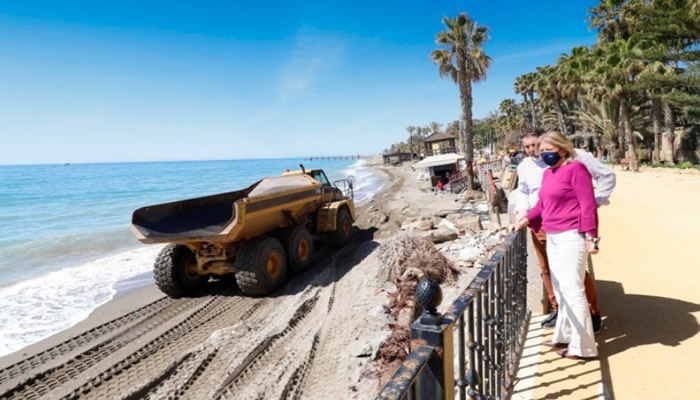 Teresa Ribera has been invited to personally inspect the condition of beaches in the Malaga city of Marbella.

As reported by Marbella City Council today, Monday, July 4, Angeles Muñoz, the mayor of the Malaga city of Marbella has sent a letter to Teresa Ribera, the Minister for the Environment in Spain. In her communication, Ms Muñoz reiterated her invitation to visit the city’s beaches and promenade and confirm that it is essential to undertake coastal stabilisation projects urgently.

A similar letter had already been sent previously to the head of the Ministry on June 24, with the proposal that she travels to the town to see the reality of the coastal strip first-hand.

As no response was received, the mayor of Marbella subsequently transferred a new invitation to Ms Ribera. Once again she has expressed the need for the Government of Spain to execute the construction of the Marbella and San Pedro Alcantara breakwaters as quickly as possible.

Ms Muñoz also reminded Ribera in her letter that the Paseo Maritimo constitutes a facility of general interest for the municipality. She pointed out that it is an important element of cohesion and integrating space that runs along almost all of the city’s 27 km coastal strip. This was stressed in view of the minister’s announcement to demolish part of this coastal path.

The mayor expressed her conviction that the Minister for the Environment: “Can find a date for this meeting, which will allow, I am convinced, the central government to make a firm and definitive commitment to Marbella and San Pedro, and speed up the procedures and the construction of the breakwaters, as our coastline cannot continue to bear the consequences of storms without protection”.