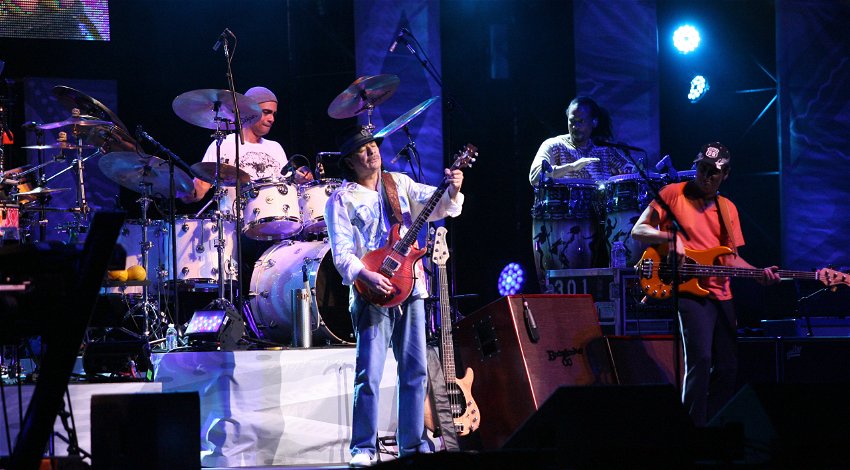 FANS were asked to pray for rock legend Carlos Santana after he collapsed on stage during a show at the Pine Knob Music Theatre in Clarkston, Michigan late on Tuesday, July 5.

Seventy-four-year-old Carlos Santana collapsed around 40 minutes into the show after launching into his song Joy at the Pine Knob Music Theatre (formerly DTE Energy Music Theatre), an outdoor amphitheatre in Clarkston, some 40 miles northwest of Detroit, Michigan, US.

His manager Michael Vrionis said that the ‘Smooth’ guitarist had collapsed due to ‘heat exhaustion and dehydration’.

“Carlos was taken to the emergency department at McLaren Clarkston for observation and is doing well,” Michael Vrionis said.

“The show with Earth, Wind & Fire for tomorrow July 6th at The Pavilion at Star Lake (formerly the S&T Bank Music Park) in Burgettstown, PA will be postponed to a later date. More details to follow thru Live Nation,” he added.

Fans in attendance were asked to pray for Santana, who recently suffered chest pains that required a medical procedure.

Videos circulating on social media show the moment the legendary performer was escorted from the stage.

In an update from Santana himself on Facebook, the ‘Black Magic Woman’ performer wrote: “To one and all. Thank you for your precious prayers.

“Cindy and I are good just taking it easy. Forgot to eat and drink water so I got dehydrated and passed out.

“Blessings and miracles to you all.”

The worrying incident comes after suffering chest pains in December last year, which forced the rocker to cancel a series of concerts in Las Vegas.

“Last Saturday, I had an incident where I asked my wife, Cindy, to take me to the hospital ’cause I had this thing happening in my chest,” Santana said in a series of tweets at the time.

“So when we went there, we found out that I needed to take care of it.

“So I am, and I’m going to be taking time off for a little bit to make sure I replenish, and I rest and I catch up with my health so that when I play for you, I will play the way I’m used to and give you 150 per cent – I wouldn’t show up unless I could do that,” he said.

Last week another legendary rocker suffered a medical emergency at a show in the US.

Bret Michaels, lead singer of 80s rock band Poison and star of Rock of Love, was taken to hospital on Thursday, June 30 after having a bad reaction to ‘Covid medication’.

The Poison frontman was about to take to the stage in Nashville for his stadium tour with rock heavyweights Def Leppard, Motley Crue and Joan Jett but was rushed to hospital instead.

In an update from Michaels, he revealed that he had suffered an “unforeseen medical complication”.