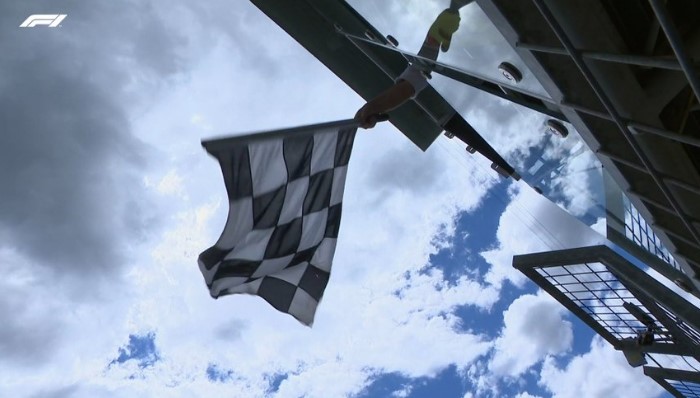 Image of the chequered flag at an F1 race. Credit: [email protected]

Current F1 world champion Max Verstappen edged further ahead of his rivals after winning the sprint race at the Austrian Grand Prix on Saturday, July 9. He drove his Red Bull to a convincing victory, picking up another eight points to move 44 points clear at the top of the drivers’ table.

The Dutchman took the chequered flag 1.6 seconds ahead of the two Ferraris of Charles Leclerc and Carlos Sainz. Saturday’s positions determined the grid line-up for today’s race, Sunday, July 10, at the Red Bull Ring in Spielberg, Austria.

Red Bull’s other driver, Sergio Perez pulled off a spectacular result, the Mexican moving from 13th at the start to finish in fifth. A bizarre incident as the lights changed saw Fernando Alonso’s Alpine stranded on the track, not moving, and with one of its tyre protectors still on the front wheel.

George Russell brought his Mercedes home in a respectable fourth place, while his teammate Lewis Hamilton just managed to creep into the points in eighth.

Frustration in the Mercedes garage after P4 and P8 in Sprint#AustrianGP #F1 https://t.co/ALciJbaUsf

Verstappen was fastest off the starting line, and by the time the two Ferrari drivers had sorted themselves out, by the end of the third lap, the Red Bull was already two seconds clear.

“We had good pace at the beginning and after that, we were very closely matched, it was as a sprint should go, it was quite flat out. I do expect tomorrow is going to be a very interesting battle again”, commented Verstappen after the race.

The pace of the car was really good today @redbullracing 💪 And with all those fans on the stands it was a very good afternoon!

Tomorrow’s race will be a lot longer, so we have to be on it again 👊#AustrianGP pic.twitter.com/Jg6cOykBjo

“We are quick. We can get them tomorrow”, LeClerc was heard saying over the team radio. In his television interview though the Frenchman was more circumspect. “It was tricky. The first part of the race was all about managing. Max was pushing and I was just trying to look after my tyres. I had a small fight with Carlos and then I started to push towards the end and could close in a bit but it was very close”.

"We cannot afford to do what we did today" in Sunday's race, says Charles#AustrianGP #F1Sprint https://t.co/QsU8Z8QcEg

Esteban Ocon completed a fine drive in the Alpine to clinch sixth on the grid, with the Haas of Kevin Magnussen behind him in seventh. The other Haas driven by Mick Schumacher took ninth spot.

Valtteri Bottas thought that he had rounded out the top ten in the Alfa Romeo, but he was hit with an engine penalty and will now start from the back of the grid. That promoted Britain’s young McLaren driver Lando Norris to tenth.

Great to see all of you there today Orange Army 👌🦁