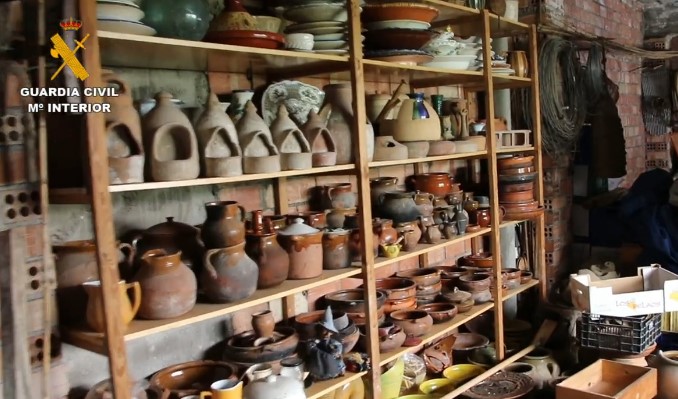 As reported by the force in a statement this Saturday, July 16, during a drug trafficking search of a private property in the Valencian municipality of Guadassuar, Guardia Civil officers uncovered an incredible treasure trove of more than 1,000 archaeological artefacts.

The remains of ceramics, including tiles, pots and bowls were discovered neatly arranged on work tables clearly for classification and restoration. Other items were found already restored and displayed in different areas of the home. Some of the archaeological pieces were estimated to date back to between the 12th and 18th centuries.

In order to continue with the investigation of these new crimes, the Guardia Civil must request an extension of the original authorisation for the house search. It is believed that these effects could come from other types of crimes such as those against historical heritage.

Once this new authorisation has been granted, specialists from the Inspection of Historical-Artistic Heritage of the Generalitat Valenciana will proceed to analyse the find. They have already confirmed that this discovery could be one of the most relevant findings in the Valencian Community, with pieces of unique incalculable value among the effects.

A 68-year-old man has been arrested by the Guardia Civil for crimes against historical heritage, against public health – drug trafficking – and illegal possession of weapons. During the aforementioned search, officers seized a shotgun and a rifle, both without the mandatory documentation.

During the search, 13 hives were also found, some of them with the number deleted and with bees inside. 11 of these hives had been stolen from the Cuenca town of Buenache de la Sierra, and the other two from Guadassuar in Valencia.