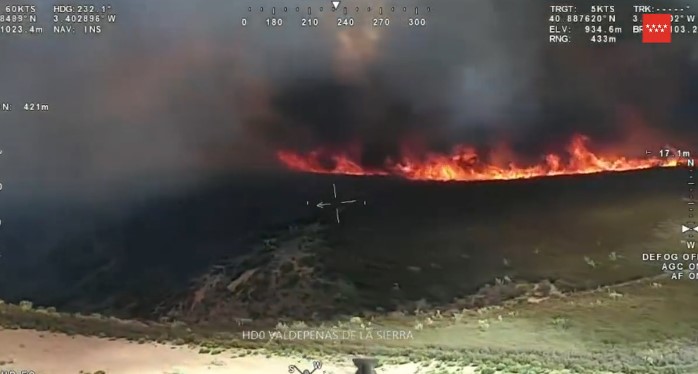 Image of one of the forest fires burning in Castilla-La Mancha. Credit: [email protected]

Infocam Plan in Castilla-La Mancha has raised the alert to Level 2 for two forest fires that are burning and could cause a danger to the public and property.

More than a hundred personnel are battling a massive forest fire that was declared in the Castilla-La Mancha municipality of Valdepeñas de la Sierra, in the Sierra Norte de Guadalajara this afternoon, Tuesday, July 19.

Another 30 aerial means are combating the blaze from above. It is burning close to the border with the Community of Madrid, and Madrid 112 Emergency Services has deployed 10 ground means along with 4 aerial means in the way of assistance.

Level 2 has been declared for the fire by the Infocam Plan for forest fires in Castilla-La Mancha. This is done when an emergency situation caused by one or several forest fires could seriously affect the population or assets of a non-forest nature.

Due to the severity of the fire and the spread of smoke, some 70 people have been evacuated from three towns in the area: Valdepeñas de la Sierra, Valdesotos, and Tortuero, all from the province of Guadalajara.

Jose Luis Escudero, the Minister of Sustainable Development has travelled to the location, and the government has mobilised the Military Emergency Unit (UME). According to regional government sources, although the investigation is still ongoing, the main line at this time is that the fire “could have been intentional”, as reported by eldiario.es.

A second forest fire has also broken out near the town of Chiloeches, also in the province of Guadalajara. Seven land resources and 31 firefighters are currently tackling this blaze. Smoke from both fires can be seen from various points in the Community of Madrid. As can be observed in the video footage below, drivers travelling along the A-2 can see the fires to either side of them.

A video uploaded onto the SocialDrive app shows the extent of this second fire in the Sierra de Chiloeches: