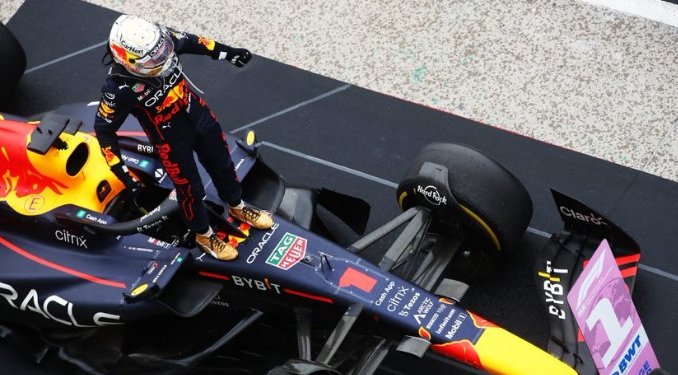 Red Bull’s Max Verstappen drove his car from tenth on the grid to win the Hungarian Grand Prix.

Current world champion Max Verstappen won today’s Hungarian Grand Prix at the Hungaroring in spectacular fashion. The Dutchman drove his Red Bull from tenth on the grid to take the chequered flag, and his eighth win of the season.

Wow what a day! It was a crazy race, but we stayed calm and won! This feels absolutely amazing 🔥

The car was great and today we adapted to the circumstances really good, so our strategy worked out perfectly. Mega job team @redbullracing 👏#HungarianGP pic.twitter.com/YwYTty5QXW

With only nine races remaining, today’s victory increased Verstappen’s lead in the championship to an incredible 80 points. On his way to the win, he twice passed Ferrari’s Charles LeClerc, who had to settle for sixth position.

Lewis Hamilton capped a tremendous display in the Mercedes by claiming second on the podium, demoting his teammate Russell to third.

That’s P2 and back to back double podiums for @MercedesAMGF1 !! We're going into the summer break much stronger than we were at the start of the season. We are moving FORWARD and that win is getting CLOSER! Thank you to all the fans, hope you enjoyed that one 💥💥 pic.twitter.com/PwIdw5c8sr

Wanted more starting from pole but couldn’t be prouder of the job we’ve done as a team today and over the past few months to close the gap. Another double podium. Let’s keep pushing! 👊 pic.twitter.com/Nd3oX42GWv

Verstappen picked off the field one at a time, even coming back from spinning off the track to catch and overtake LeClerc for a second time just four laps later. Once he took the front he never looked like losing the lead. Sergio Perez hung on to take fifth place in the other Red Bull.

Lando Norris showed his undoubted talent with yet another fine drive in the McLaren to finish in seventh. Fernando Alonso and Esteban Ocon took their Alpines to eighth and ninth respectively, with Sebastian Vettel – who announced his retirement this weekend – rounding out the top 10 in the Aston Martin.