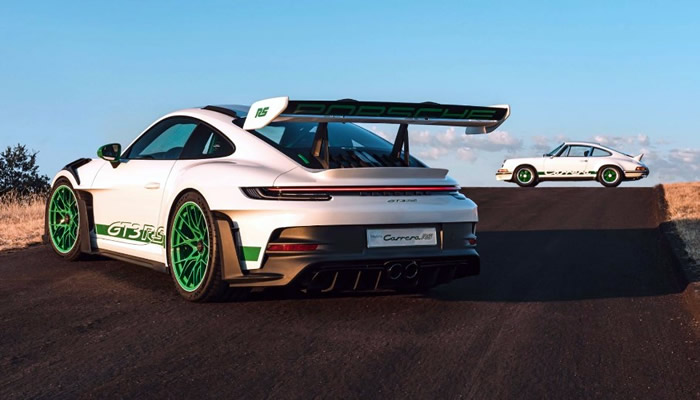 The 50th anniversary of the Carrera RS 2.7 is being celebrated with the public presentation of the new Porsche 911 GT3 RS.

As announced today, Friday, August 19, by the Porsche Newsroom, the 2023 Porsche 911 GT3 RS made its first in-person appearance today at The Quail, a motorsports gathering, just two days after its digital world premiere. The show car – customized by the GT Model Line and Style Porsche – is a tribute to the 1972 911 Carrera RS 2.7.

“America is the second home of the 911 and a special tribute exclusive to the U.S. is the perfect way to celebrate the 50th anniversary of the 911 Carrera RS 2.7″, said Gruner. “So many of us idolised the original 1972 car. We want to create a special experience that combines exclusive options on the new GT3 RS with a one-of-a-kind list of accompanying items” he continued.

“Together, it will be an exciting and individual tribute to the RS lineage. This is a live project in its early stages and is being created by enthusiasts, for enthusiasts, as a joint effort between our colleagues in Zuffenhausen, Flacht and our team in America. The ideas and concepts are really exciting and we’re having a lot of fun developing it – all of us are looking forward to sharing more details with you soon”, added Gruner.

Appropriately for Monterey Car Week, the model on display is extensively personalised. Finished in white with key areas in Python Green, the car is a direct reference to the iconic white and green colour configuration offered in 1972 on the first 911 ‘RS’ model as well as a new interpretation of it.

In this instance, the body is finished in non-metallic white including side air intakes painted to match, with model designation graphics on the sides and rear in Python Green, forged aluminium wheels in Python Green with white pinstripes.

Exclusive Design taillights emphasise the green-on-white theme by eliminating the red colour from the rear taillights and third brake light. Finally, the side plates on the left and right ends of the large rear wing are painted white with RS logos in Python Green.

“As a car enthusiast growing up, my walls were plastered with models that I was particularly fond of. One of the most influential was the 911 Carrera RS 2.7. As a young kid it captured my imagination and even today it puts a smile on my face,” Andreas Preuninger, Director of GT Model Lines, explained.

“That’s where the styling inspiration of the 996 GT3 RS came from, which was one of my first projects at Porsche. At the time, that car felt totally extreme so colours nodding to the forefather made sense. Today, it’s a very emotional moment for me to pay tribute to the first 911 RS model with our most extreme and capable 911 GT3 RS yet”.