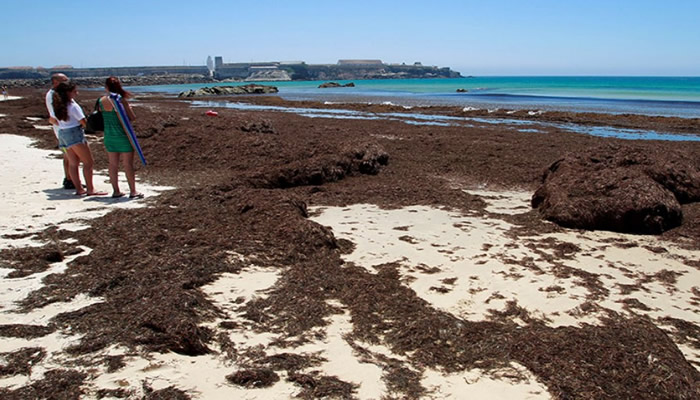 Image of the Asian algae that is causing problems for fishermen in Andalucia. Credit: [email protected]

Fishermen in Andalucia are to receive government aid to alleviate the effects of the Asian algae that is causing problems along parts of the coastline.

More than 450 requests for help have been received by the Andalucian government from professionals in the fishing and shellfish sector. They all related to the presence and proliferation of the algae ‘Rugulopterix okamurae’ along the coast of Andalucia.

As reported by Minister Carmen Crespo on Monday, August 22, the Ministry of Agriculture, Fisheries, Water and Rural Development: These requests refer to the second call made available to Andalucians by the Board to deal with a situation that has overwhelmed a key sector for the economy of the autonomous community and that unfortunately, it is not receiving support for from the central government”.

“Although it is not the responsibility of this Ministry, we are doing everything in our power to offer help to fishermen who are being terribly affected by this invasive species that, in addition to making fishing difficult, is causing damage to fishing nets”, explained Crespo.

“In addition to suffering economic losses derived from the reduction in catches, fishermen have also spent months being forced to invest time and money in fixing their nets and other tools that they use in their day-to-day activities”, she pointed out.

The vessels especially affected by this circumstance are those dedicated to trammel netting, and longlining.

Carmen Crespo lamented that: “Although the Ministry for the Environment has a strategy against the proliferation of Asian algae, the National Department of Fisheries has not yet launched any initiative to support professionals of the sea affected by it”.

“On the contrary, the Andalucian Government is supporting the fishermen and shellfish gatherers with our own resources which, adding the two open calls, represent the mobilisation of almost €2.5 million”, highlighted the minister.

Given this situation, the Ministry has officially requested a meeting with Alicia Villauriz, the Ministry’s General Secretary for Fisheries. They will analyse the possible adoption of “new measures by the central government, aimed at protecting a strategic sector for the Spanish and Andalucian economy such as fishing”.

Specifically, the first call for aid was made available to the sector in 2021 with a budget of €1.5 million, which allowed the granting of subsidies to a total of 326 vessels. In the case of aid for 2022, the budget is close to €955,000, to subsidise the temporary stoppage (maximum of 40 days) of ships that suffered a decrease in their economic income between January 1 and December 31, 2021.

Likewise, shellfish vessels from Malaga and Cadiz affected by the closure of the production areas that took place between October 15, 2021, and February 25, 2022, can also benefit from the incentives.

As Crespo pointed out: “The ultimate goal is to try and counteract, to the best of our ability, the decrease in income that Andalucian fishermen and shellfishers are suffering due to the drop in sales and the reduction in days of work”.

“To this can be added the impossibility of going out to work under normal conditions as a result of the presence of algae in the fishing grounds of this community”, she added.

Specifically, the amount established for the aid amounts to €100 per day of inactivity of a fishing vessel due to the presence of ‘Rugulopterix okamurae’.