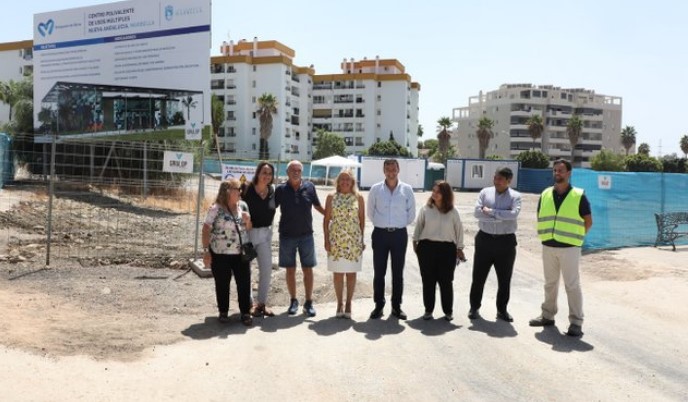 Marbella Council begins the construction of a multiple-use centre in the municipality of Nueva Andalucia.

As announced on the official Twitter account of Marbella City Council on Thursday, August 11, the construction of a Multiple-Use Centre on Avenida Miguel de Cervantes Avenue in the Marbella district of Nueva Andalucia has started.

It will have an area of ​​more than 1,800m² and will house a multipurpose room of more than 400m², along with meeting areas, a gym, and about thirty parking spaces.

Angeles Muñoz, the mayor of the famous Malaga city, during a visit to the site, pointed out that: “It is a facility that responds to the demands of the residents of the area and it will have a clear socio-cultural utility”. She explained that the project has an execution term of twelve months, scheduled to end in the summer of 2023, with a budget of €1.5 million.

“This legislature promised to provide the municipality with the necessary infrastructure to improve the quality of life of the residents. Different actions have been promoted in Nueva Andalucia, such as the permanent fairground of the Charity Farm and the future health centre expansion works“.

She detailed that the centre: “Will be closely linked to the Mayor’s Office itself and will be a meeting point for groups, encouraging citizen participation”. Ms Muñoz also indicated that: “It has been a complicated procedure because the company to which the project was initially awarded went bankrupt and so it had to be put out to tender again”.

The new centre will consist of three levels. A 1,081m² basement will contain 28 parking spaces, a warehouse, and the water storage tank facilities. The ground floor, of more than 600m², will house a multipurpose room of more than 400m², a gym, changing rooms, and toilets.

An upper floor of almost 90m² will be used for administration, with offices and projection and meeting rooms. The main access to the building will be on the west facade, in anticipation of the future construction of a green area along that boundary.