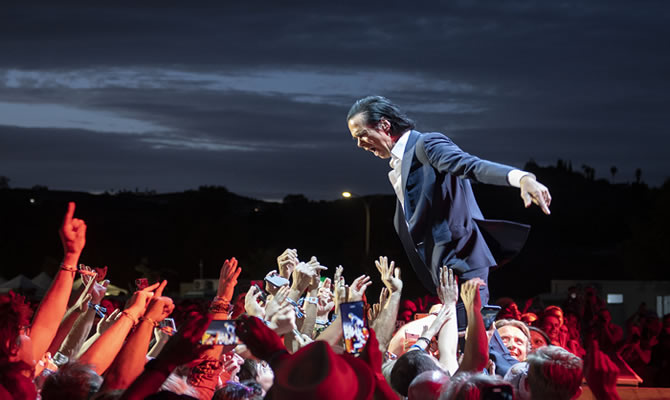 Nick Cave and the Bad Seeds were the Kings of La Cala as they produced an emotional and powerful set on the second day of the inaugural Cala Mijas festival on Friday, September 2.

Effortlessly time-walking their way through their 40-year catalogue of songs of love and hate, Cave and his crew of loyal servants seem to just get better with age and experience.

From the opening couplet of ‘Get Ready For Love’, and, ‘There She Goes, My Beautiful World’ – both taken from the expansive ‘Abattoir Blues/The Lyre Of Orpheus’ collection of 2004 – Cave had the audience literally eating out of the palm of his hand.

There was a mood of celebration from the very start and the Australian wasted little time in embracing his audience, falling into the crowd and showing faith in their support and worship.

With oldies such as ‘From Her To Eternity’, and ‘Tupelo’, it sometimes feels like a religious sermon, with Cave preaching from the heavens one minute and stoking the fires of hell the next.

Highlights included ‘Red Right Hand’, and ‘The Mercy Seat’, with wildly bearded multi-instrumentalist Warren Ellis – primarily on guitar and violin – an integral part of the six-piece Bad Seeds, who continue to play with a sense of love and a hint of menace.

The encore saw Cave deliver a solemn but romantic ‘Into Your Arms’ from his piano before finishing with ‘The Weeping Song’, with the crowd clapping percussively to his command.

Cave has seemingly been wearing the same suit for decades but it’s difficult to think of another artist who has so much physical and emotional contact with his audience and, by the end, he’s left absolutely nothing on stage, he’s given his all.

In contrast, legendary German electronic pioneers Kraftwerk represented the very antithesis of Cave by celebrating their robot persona with the minimum of movement and feeling. There’s no doubting their enormous influence on modern music and the legacy they have created over the past 50 years.

They have been true visionaries with the likes of ‘Autobahn’, ‘Trans Europe Express’, and ‘The Man-Machine’, and inspired much of the techno and dance movements of recent decades.

But with 2003’s ‘Tour de France Soundtracks’ being their last album, their sole focus nowadays (with Ralf Hutter the sole founding member of the current quartet) is on delivering a unique live audio-visual experience – even better for those wearing 3D glasses.

Hit single ‘The Model’ generated some excitement in the crowd as they eventually built up some momentum, but it’s impossible to suggest that Kraftwerk ever have good or bad nights, as they’re just all the same.

With no Kraftwerk, there would probably be no Chemical Brothers, who followed on the Sunrise stage in the early hours of Saturday morning.

The electronic duo of Tom Rowlands and Ed Simons have plenty of big-beat hits to draw on from their 30-year career and there was no shortage of revellers, but ultimately it just amounts to a lot of programming, repetitive visuals, and a fancy light show.