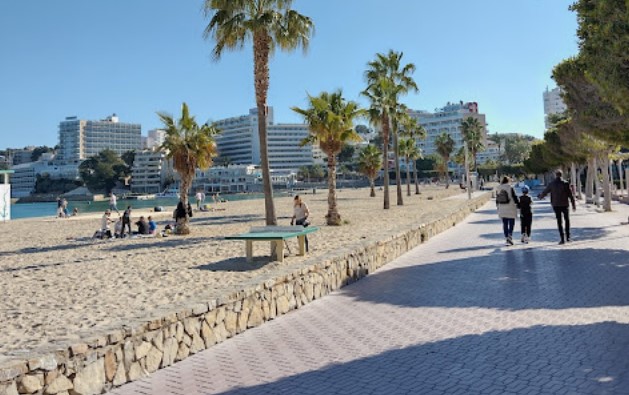 Image of Calvia in the resort of Magaluf in Mallorca. Credit: Google maps - Grzegorz Landowski

Five men who brutally attacked a British tourist in the Mallorca resort of Magaluf allegedly claim they were acting in ‘self-defence’.

As reported today, Sunday, September 4, a British tourist was brutally beaten by a group of men in the resort of Magaluf, on the Balearic island of Mallorca. According to metro.co.uk, the incident occurred on July 26, with five male suspects subsequently being arrested in connection with the brawl.

A graphic video appeared on social media platforms shortly after the event took place. The unnamed Brit can be seen brandishing what appears to be a stick-like object as he is confronted by five men. He strikes one of the men with the object which is then grabbed out of his hand by the other man.

The British man is seen trying to flee but one of the group manages to floor him before more men join in and launch an attack on him.

According to a Guardia Civil spokesperson: “The Guardia Civil and Local Police in the municipality of Calvia which Magaluf is part of, have arrested five people on suspicion of a crime of wounding. This incident received a lot of coverage at the time following the publication of a video of the fight on social media”.

“In the video, a British person can be seen using a golf club to attack other people, who end up attacking him until he falls to the ground, where they continue to assault him and cause him serious injuries. An investigation was launched and the same day, two of the participants were arrested. Another three men were held on September 1”, they confirmed.

It is thought that two of the detainees are of Pakistani origin, two from Romania, and one Bulgarian, although no names have been released. No information has been revealed about the British man, as to his current condition or whether he was hospitalised following the incident.

Police sources said the man had been found lying unconscious in the street with serious injuries to his face. It is believed that the suspects are claiming they acted in ‘self-defence’.