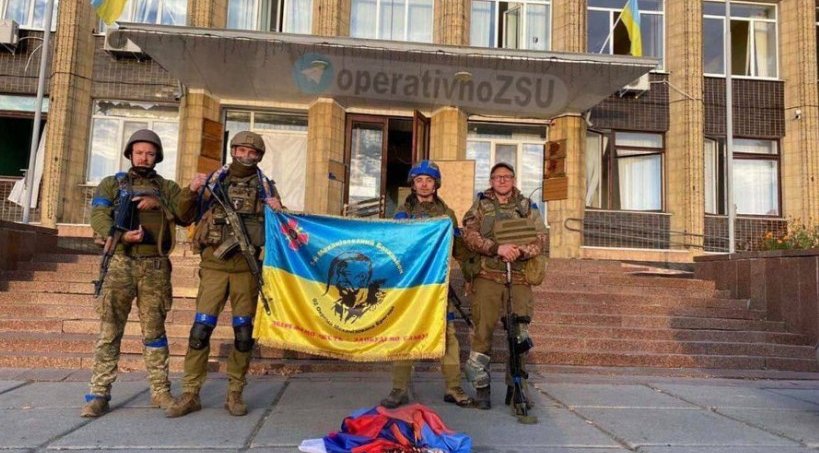 An unconfirmed report claims that Denis Pushilin has resigned as head of the so-called Donetsk People’s Republic (DPR) and fled the region.

Unconfirmed reports from intelligence sources in the Russian-occupied Donetsk region of Ukraine claim today, Saturday, September 10, that Denis Pushilin, the leader of the so-called Donetsk People’s Republic has fled. A signed document that appeared online purports to be his resignation as leader of the pro-Russian territory.

🚨 Denis #Pushilin may have potentially resigned as head of DPR pic.twitter.com/qNe9PWMUMn

Ukrainian forces are said to be liberating large swathes of territory at an unbelievable rate today, Saturday, September 10.

Several cities are reported to already be back under Ukrainian control, with the national flag flying once more. The latest breaking – although unverified – news coming from online sites is that the Ukrainian Armed Forces have reached the outskirts of the cities of Lysychansk and Severodonetsk have been reportedly reached.

🚨 #Lysychansk and #Severodonetsk have been reportedly reached by Ukrainian Armed Forces.

The counter-offensive by Ukraine appears to have been a stunning success. Balakliya is reported to be among the towns recently retaken, with online videos showing the Ukrainian flag flying in the town centre of the Kharkiv region location. Colonel General Oleksandr Syrskyi, the Commander of Ukrainian Land Forces, is in charge of the offensive in this area.

The town of Balakliya, Kharkiv region, is liberated by Ukrainian troops!
The Commander of Ukrainian Land Forces, Hero of Ukraine, Colonel General Oleksandr Syrskyi is leading the Ukrainian offensive in this sector.
The Ukrainian flag has been raised in the town centre. pic.twitter.com/zQ8ngDitZw

In the Luhansk region, partisans are said to have raised the Ukrainian flag over Kreminna last night, Friday, September 9. It was reported that Russians and collaborators have left the territory of the Luhansk region en masse.

Meanwhile, Serhii Haidai, the head of the Luhansk Regional Military Administration, claimed in a video that the Armed Forces of Ukraine are massing on the outskirts of the city of Lysychansk.

⚡️Serhii Haidai, the head of the Luhansk Regional Military Administration, spoke about the current situation in the region:

– residents of Lysychansk have already seen the Armed Forces of Ukraine on the outskirts of the city. pic.twitter.com/OgnbsynrcB

There have also been unconfirmed reports of an intense battle going on at Donetsk airport this evening, Saturday, September 10.

It has also been claimed by residents of Volchansk that the Russian troops have pulled out of the city located near the Ukraine-Russia border. Similar reports have been made by pro-Russian sources in Izyum, saying that the occupying forces have gone, abandoning around 60 tanks in the process. It was subsequently reported that the Kremlin had confirmed the withdrawal from Izyum.

🚨#BREAKING: The #Kremlin now confirming that Russian Forces have withdrawn from #Izyum.