UPDATE: Calpe policeman swept to his death as a quarter of annual rainfall is received in an hour 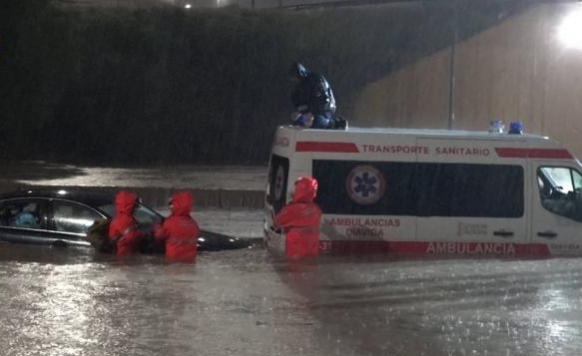 15:10 pm (September 18) – A Punt Oratge has confirmed that the downpour that resulted in the death of the Calpe policeman, saw more Benissa receive more than a quarter of its annual rainfall fall within an hour.

The President of the Valencia Communidad Ximo Puig took to social media today to express his condolences to the family and colleagues of Manuel Policarpo.

11:44 am (September 18) – A Calpe policeman has been swept to his death trying to rescue a person trapped inside a vehicle that was being swept away by flood waters.

Manuel Policarpo, 49, was swept to his death at around 2 am on Sunday, September 18 after police responded to a 112 call. Responding to the call Policarpo went to the aid of the person whose vehicle was trapped in a path that runs parallel to the riverbed in the Empedrola urbanisation.

Policarpo and his partner wouldn’t normally have responded to the call as the car was in trouble outside of their jurisdiction, but with Benissa police and emergency services overwhelmed following the rains they responded.

Police managed to rescue the driver and a family member who had managed to get out of the car, but in the process, Policarpo lost his footing and was dragged away in the current. He was found at around 6:37 am some two kilometres from where he went missing.

Policarpo, who is from a well-known Calp family, is survived by two children.

Similar rain has fallen in Castellon resulting in a number of people having to be rescued and many campsites and caravan parks evacuated. The alert for the area has been upgraded for today, with more heavy rain expected.

Floods were expected with the first rains after a hot and dry summer, resulting in many requiring rescues and a Calpe policeman being swept to his death. R.I.P.