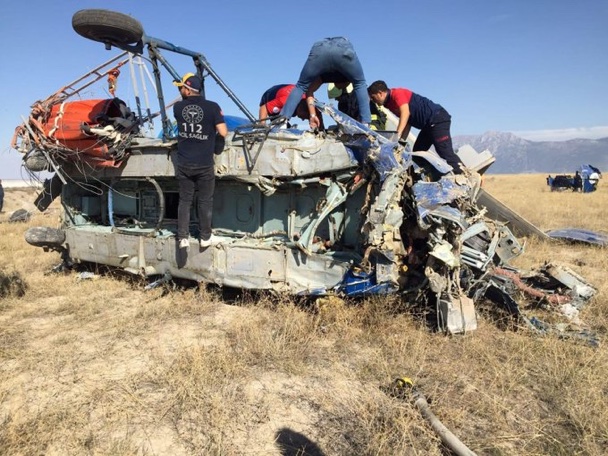 THE Turkish Interior Ministry said that there were two Russians in the fire-fighting helicopter that crashed in the country and the death toll had risen to two.

As noted, the fire-fighting helicopter was flying to extinguish a fire in Marmaris when it crashed near Denizli. Emergency services were sent to the scene.

In the published photos from the scene of the incident, the inscription “Vladivostok Avia” can be seen on the helicopter’s plating.

ORIGINAL 4.45 pm (September 21) – A Russian-owned helicopter crashed in Denizli as it tried to assist in extinguishing an ongoing fire in Marmaris, Turkey, as reported on Wednesday, September 21.

The Russian-owned helicopter crash in Turkey tragically killed one person and is believed to have injured four more people.

The helicopter had been dispatched to help tackle a forest fire in Muğla’s Marmaris district in Turkey, however, as it travelled in the skies over Denizli, the helicopter spun out of control and crashed to the ground, as reported by sondakika.com.

Denizli Governor Ali Fuat Atik said: “The helicopter crashed near Çardak district and that the teams were urgently directed to the region. I am also on my way to the scene.”

People have reacted to the news online.

The Mayor of Fethiye Municipality, Alim Karaca wrote: “I have learned with regret that the firefighting helicopter, which went to intervene in the fire in Marmaris, crashed in the Çardak district of Denizli. I wish God’s mercy on those who lost their lives in the accident, and a speedy recovery to the injured.”

Çardak Mayor Hüsnü Yılmaz stated that the fire helicopter crashed in the Acıgöl area near the district centre and said, “There is information that there are 7 personnel in the helicopter. Rescue work has been started about the incident. We will make an investigation at the scene.”

Alim Karaca also shared photos of the blaze that the Russian-owned helicopter was on its way to before it crashed.

He wrote: “Our hearts and prayers are with you. I hope the fire is brought under control as soon as possible and there is no loss of life.”