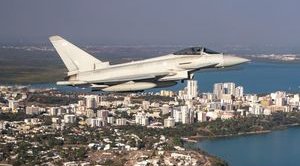 The RAF to participate in a large-scale air exercise in Australia for the first time since the Covid pandemic.

The RAF has started a series of exercises that will see the UK Armed Forces training with Australia, Japan, the Republic of Korea and other Indo-Pacific nations, until December, the Ministry of Defence confirmed on Sunday, September 25.

Four Typhoon fighters and one Voyager air-to-air refuelling aircraft from the RAF joined Exercise Pitch Black in Darwin, Australia. It was the first time the RAF had taken part in the exercise since the pandemic, with around 100 aircraft and 2,500 personnel from 17 countries participating in large-scale, complex training missions.

The RAF Typhoons flew by day and night as part of large multinational formations of aircraft over one of the largest air training areas in the world. Pilots operated in both the air-air and air-ground roles, often in the same sorties, both as attacking and defending forces. Each exercise mission was supported by a Voyager air-air refuelling tanker which provided fuel to jets from a number of participating nations.

The RAF’s contribution to Exercise Pitch Black is a tangible demonstration of UK air power and highlights the UK’s ability to deploy rapidly at long range. It also illustrates the UK’s desire to enhance international military relationships for the safe and effective conduct of air operations with partner nations.

As part of this aim, the Typhoon fighters flew back to the UK via Malaysia and India to conduct further defence engagement activity.

The Royal Navy, meanwhile, celebrates one year of permanent presence in the Pacific, following the departure of HMS Spey and HMS Tamar from Portsmouth. In the year since they left, the vessels have sailed 40,000 nautical miles each and collectively visited 17 nations and British Overseas Territories.

The two UK warships are deployed to the Indo-Asia-Pacific as part of the UK’s tilt towards the region. HMS Spey has just completed participation in the largest military exercise in northern Australia this year, Kakadu 22, while HMS Tamar will host teams from the US Navy and Royal New Zealand Navy for a large-scale mine warfare exercise off the Republic of Korea. These teams will operate Remus autonomous underwater vehicles from the ship.

UK Defence Secretary Ben Wallace said: “Security and stability throughout the Indo-Pacific remain paramount, and with the Pitch Black exercises and the persistent presence of the Royal Navy in the Pacific, we are able to demonstrate our commitment and shared responsibility across the region and further strengthen our close ties with friends and allies.”