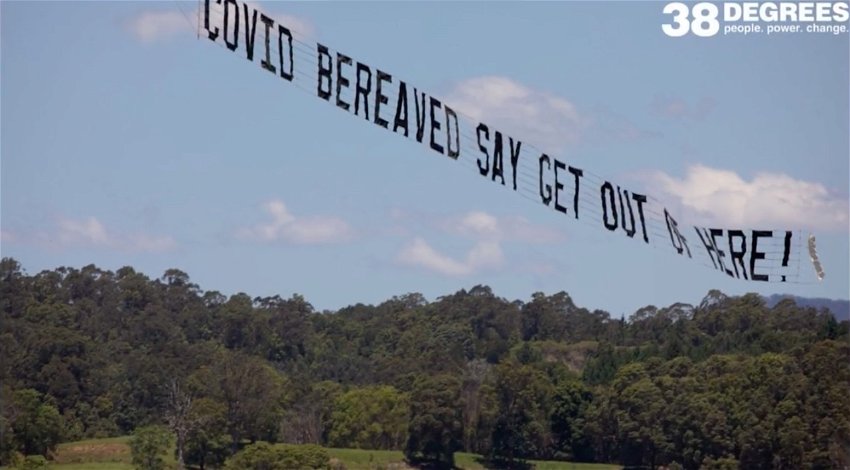 A HUGE banner calling for Matt Hancock to be axed from I’m a Celebrity has been seen flying over the camp.

The 11 celebrities got a surprise on Tuesday morning when a huge banner with a damning reference to Matt Hancock flew above their heads.

The banner said, “Covid bereaved say get out of here!”

The former health secretary – who broke his own Covid-19 pandemic guidelines while others were unable to say goodbye to their loved ones in hospital – has caused controversy with his decision to take part in the ITV reality show.

The protest was organised by 38 Degrees and Covid-19 Bereaved Families for Justice.

You can run to the jungle, @MattHancock, but you can't hide from reality.

We flew a plane above @ImACelebrity's camp with a message from @CovidJusticeUK. A noise complaint suggests it didn't go unheard.

Since Mr Hancock joined the ITV show, viewers have been trying to make his life a misery by continuously voting for him to do the Bushtucker trials.

But this decision appears to have backfired due to the programme being labelled “boring” by frustrated fans who don’t want him to have so much airtime.

Following the news of his plans to become one of this year’s campmates, the West Suffolk MP was stripped of his Tory whip and criticised for leaving his constituents.

He says that he is going to the Aussie outback to “talk directly to people not interested in politics” and that reality TV is a “different way to communicate with the electorate” due to how it is “honest and unfiltered”.

Mr Hancock – who claims he previously turned the ITV programme down twice over the summer – said with his fee he would make a donation to St Nicholas Hospice in Suffolk and causes supporting dyslexia.