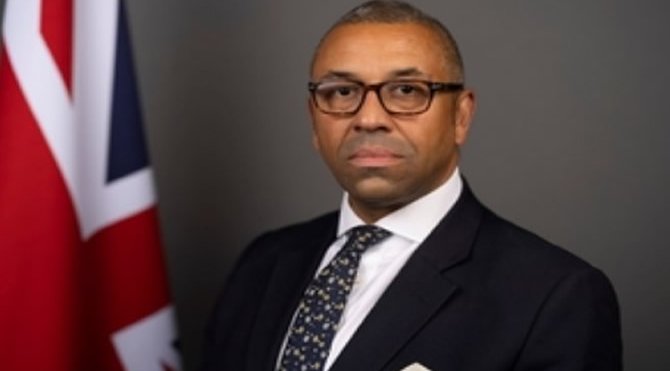 Funding from the UK will be used to help repair Ukraine’s damaged energy systems and get power back to the Ukrainian people.

Ukraine will have further UK support to keep the lights on across the country and repair energy infrastructure damaged by Russian attacks, Foreign Secretary James Cleverly announced today, Monday, November 14.

The UK is so far the biggest donor to the Ukraine Energy Support Fund. This latest funding will provide specialised energy equipment to keep critical national infrastructure up and running – a priority request from the Government of Ukraine.

Since October 2022, Russia has carried out widespread missile and drone strikes, particularly targeting Ukraine’s power supplies. More than 40 per cent of Ukraine’s energy infrastructure, including transmission lines, power stations and pipelines, has been damaged or destroyed by Russian attacks.

This has left millions of Ukrainians across the country living without electricity or experiencing rolling blackouts.

Recently the UK has also provided £7 million for over 850 generators so that vital facilities, such as hospitals, have power. A further £5 million was provided for safety and security equipment for the civil nuclear sector.

In addition, the UK has put up a $50 million guarantee in financing for Ukraine’s state-owned energy provider, Ukrenergo, through the European Bank for Reconstruction and Development which will help Ukraine continue to supply electricity to its citizens.

The Foreign Secretary is due to sign the agreement today with Ukrainian Energy Minister Herman Halushchenko, alongside Energy Community Secretariat Deputy Director Dirk Buschle. They will subsequently transfer the first £5 million of the UK’s £10 million commitment to the Energy Community’s Ukraine Energy Support Fund.

Foreign Secretary James Cleverly said: “Russia’s attacks on vital infrastructure show that Putin is resorting to desperate measures. But even in the face of missile attacks and blackouts, the resolve of the Ukrainian people remains unbroken”.

“The Government of Ukraine said it needed specialised energy equipment to repair critical national infrastructure, and the UK is delivering on their request”, he continued.

He added: “The UK has made the largest donation to date to this Fund. We need all partners to step up their support and show Putin that his attempts to destroy Ukraine will be met with fierce resistance”.

In response, Ukrainian Minister of Energy Herman Halushchenko said: “Russia is trying to break us by shelling the energy infrastructure to leave Ukrainians on the eve of winter without heat and light. These days the support of international partners is more important than ever”.

“The UK has been helping Ukraine’s energy sector since the beginning of the Russian invasion. Today it is making a significant contribution to the Energy Support Fund. This will make it possible to purchase the necessary equipment for our energy companies, which is difficult to do as a part of humanitarian aid”, he continued.

“Many thanks to our British partners and the Energy Community Secretariat for the help in the fight against Russia on the energy front”, concluded Mr Halushchenko.

The private sector also has an important role in supporting Ukraine’s reconstruction. That’s why the Business and Energy Secretary Grant Shapps is issuing a call to action to the UK industry today. He will urge them to consider supplying emergency energy equipment, such as power generators, transformers, and cables-wires and connectors.

Business and Energy Secretary Grant Shapps commented: “We cannot stand by and watch millions of innocent Ukrainian citizens continue to suffer due to barbaric Russian air strikes. Today’s intervention from the UK Government will be critical in helping to get Ukraine’s power back up and running”.

He continued: “But this alone simply won’t suffice. In Ukraine’s hour of need, I call on the generosity of the UK industry to join the government in donating emergency energy equipment and resources through the Energy Support Fund. This will help rebuild what has been damaged by Putin’s illegal invasion as we continue to stand with the people of Ukraine”.

The Department for International Trade is also working with relevant UK trade associations and Ukrainian energy companies to identify areas where UK expertise and equipment can be provided to help with vital maintenance of Ukraine’s energy supply infrastructure.

Artur Lorkowski, the Director of the Energy Community Secretariat, said: “With hundreds of thousands of Ukrainian families without electricity, heating, and hot water, as winter sets in, support to Ukraine is needed more than ever”.

“The Ukraine Energy Support Fund is a transparent and efficient vehicle for international donors seeking to help Ukraine repair and rebuild its energy infrastructure which has been brutally damaged by Russia”, he continued.

“The donation of the United Kingdom is a great show of solidarity and will bring essential aid to Ukraine by allowing the purchase of much-needed tools and critical equipment needed to restore essential electricity and gas services to Ukrainian citizens”, he concluded.