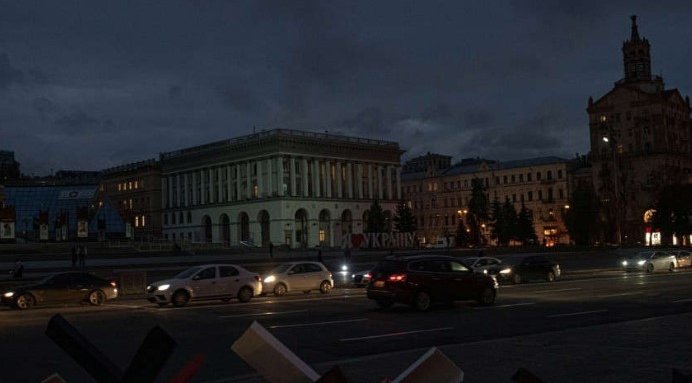 Image of the Ukrainian capital of Kyiv during a blackout. Credit: [email protected]

Rolling power blackouts are to be introduced across the country by Ukraine’s national energy company Ukrenergo.

Earlier today, Friday, November 18, the national energy company Ukrenergo stated that the rocket attacks on November 15 were the most powerful since the beginning of the special operation in Ukraine and called on consumers to prepare for long emergency blackouts, as reported by gazeta.ru.

Ukrenergo announced that the Ukrainian authorities will introduce rolling blackouts on Saturday, November 19, throughout the country, said TASS. The company emphasised that planned shutdowns will be applied in all regions of the country, and additional emergency shutdowns are not provided.

Two periods of shutdowns have been announced, the first is from midnight to 2am, (3am Moscow time), and then from 8am until the end of the day. Denys Shmyhal, the Prime Minister of Ukraine said that almost half of Ukraine’s energy system had been disabled after the missile strikes.

According to the Ukrainian edition of UNN, citing Oleksandr Kharchenko, the director of the Ukrainian Energy Research Centre, it will take three to ten days to restore the energy system in the event of a total power outage throughout Ukraine.

“From the point of view of basic calculations and regulations, what and how will happen if a blackout occurs, then according to a favourable scenario, it will take three days, according to a negative scenario, seven to ten days to restore the system and full consumption in the system”, they quoted Kharchenko as saying.

Following the Russian missile strikes on November 15, the Ukrainian energy system is stabilising, but the situation remains difficult he detailed. Kharchenko added that those who have been disconnected from electricity already have access to it, but their supply is still  “very limited”.