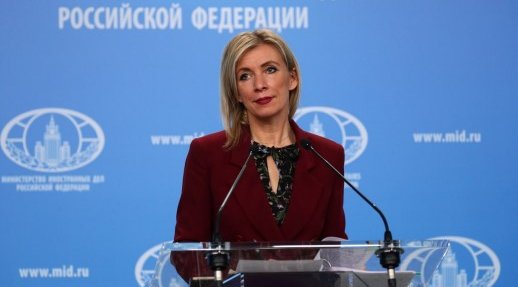 Officials in Kyiv have been accused by the Russian Foreign Ministry of being the ones really responsible for targeting the Zaporizhzhya nuclear power plant.

Maria Zakharova, the spokesperson for the Russian Foreign Ministry spokesperson today, Monday, November 21, accused the Kyiv government of being the ones really responsible for firing missiles at the  Zaporizhzhya nuclear power plant.

Posting on her Telegram channel, she wrote: “The Kyiv regime continues to ‘play with fire’ by carrying out rude and irresponsible provocations against the Zaporizhzhia NPP (ZNPP). After a period of calm, the Ukrainian Armed Forces resumed artillery strikes on the territory inside the perimeter of the plant”.

“Once again, its critical infrastructure and the lives and health of the people working there have been threatened”.

“The attacks, in particular, took place on the evening of November 19, when numerous artillery strikes with NATO 155-calibre ammunition were launched at the Zaporizhzhia NPP. They were continued on the next day, November 20, when artillery fire struck the sites where radioactive waste was stored, among other things”.

“Fortunately, significant damage to the ZNPP was avoided and there was no release of radiation. But the situation balanced on a critical line, which could quite possibly be followed by a man-made catastrophe”.

“We had been in close contact with the IAEA Secretariat since the beginning of the military strikes on the plant. After the current series, as before, we sent them all the information we had on the subject, including photo and video materials confirming the consequences of the shelling”.

“We asked them to inform the member states of the Agency without delay. The international community must know who was behind the attacks. What makes Kyiv’s irresponsible actions especially cynical is that they followed almost immediately after the regular session of the IAEA Board of Governors in Vienna”.

“This way, the Western sponsors once again showed their duplicity and gave a carte blanche to V. Zelenskyy’s regime to continue their reckless attempts to cause irreparable damage to the ZNPP. They are accomplices in Kyiv’s crimes which have no justification”.

“It’s time to call things by their proper names; otherwise, Ukrainian nationalists will not be stopped. It takes determination and responsibility. We very much hope that they will be shown”.