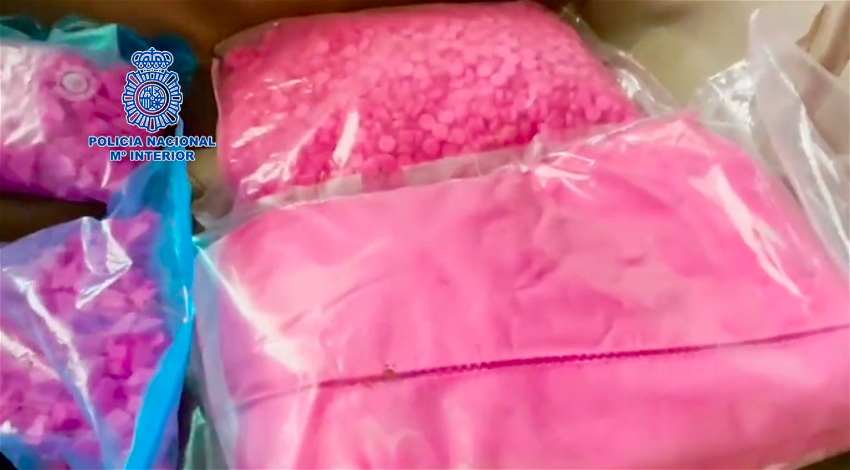 Seven people have been arrested as 24 kilograms of white and pink cocaine hidden in a suitcase at the Adolfo Suárez Madrid-Barajas airport were seized, along with €120,000 euros.

Searches carried out at the homes of the alleged members of the organisation found an additional 26 kilograms of the same substance and almost eight kilos of pink cocaine.

Officers also seized €110,000 in cash, nine high-end vehicles, and a firearm along with 500 cartridges.

The narcotic is believed to have originated from Latin America, hidden in suitcases, which the help of airport workers who allowed them to hide unlabelled suitcases in the holds of planes to avoid security controls.

National Police agents dismantled a criminal organisation that they say was dedicated to drug trafficking, specifically white and pink cocaine, which they exported by air from Latin America for distribution in the provinces of Malaga and Madrid.

The investigation into the criminal organisation, based in the south of Spain, started at the beginning of this year and discovered how large quantities of cocaine were being imported from Latin America, hidden in suitcases that avoided security controls thanks to the alleged involvement of airport staff.

Investigations led to the identity of one of the suspected members of the organisation, which later verified the existence of an alleged criminal network.

Once all members were identified, and after several inquiries, the agents carried out an operation that culminated in the seizure of a suitcase containing 24 kilograms of cocaine that had just been introduced into Spain through Adolfo Suárez Madrid-Barajas, as well as almost 120,000 euros in cash.

After the operation, the seven members of the criminal organisation were arrested and four house searches were carried out in the province of Malaga.

In these searches, a total of nine vehicles, several telephones and high-end watches, 110,000 euros in cash, more than 26 kilograms of cocaine, almost eight kilos of pink cocaine, a firearm, and 500 cartridges were seized.