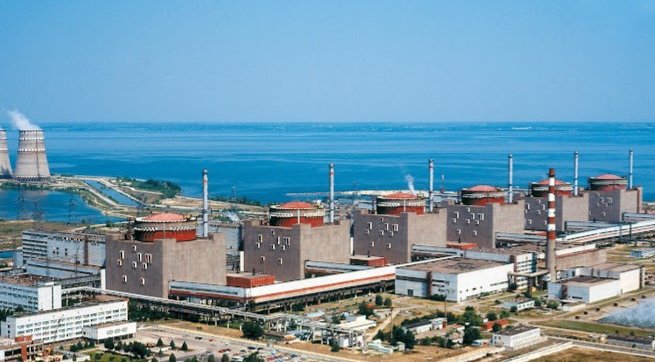 Despite the Zaporizhzhya Nuclear power plant being located near the Ukrainian city of Enerhodar, the Russian Foreign Ministry insisted it stands on Russian territory.

The Russian Foreign Ministry made a bizarre statement today, Monday, December 5 when quizzed about the situation in the Zaporizhzhya nuclear power plant. Although the facility is located near the Ukrainian city of Enerhodar, the Ministry insisted it stands on Russian territory.

This claim of course is based on Vladimir Putin’s referendum that, on paper, turned four Ukrainian territories – including Zaporizhzhya – into Russian. This action was not recognised by the international community though.

This was reported by Volodymyr Rogov, the chairman of the  ‘We Are Together’ movement on his Telegram channel, who wrote: “Question: IAEA head R. Grossi said that experts are close to an acceptable agreement between Ukraine and Russia on the creation of a safety zone around the Zaporizhzhia NPP”.

“How would you comment on this statement? Is there a possibility of transferring the control over ZNPP to a third party? Is R. Grossi, the head of IAEA, expected to visit Russia?”.

“Answer: First of all it should be noted that there are no direct negotiations between Russia and Ukraine regarding the safety zone around the ZNPP”.

“Possible parameters of the declaration on the creation of a nuclear safety zone and physical nuclear safety of ZNPP are under discussion with the IAEA Secretariat which in its turn attempts to cooperate with Ukraine”.

“It is untimely to say that the parties are close to an agreement. The question in principle is whether Kyiv is ready to commit to stop shelling and attempts to seize the ZNPP, and whether the IAEA will be able to get the Ukrainians to comply with such hypothetical agreements”.

“There is no question of removing the ZNPP from Russian control or transferring control over it to a ‘third party’. The plant is located on Russian territory and is fully controlled by Russia. We proceed from the fact that only we are capable of ensuring the physical and nuclear safety of the ZNPP“.

“We know about Mr Grossi’s desire to visit Russia again and we are ready to receive him to discuss a wide range of issues connected with the IAEA’s activities. However, there is currently no specific agreement on the dates of such a visit”.