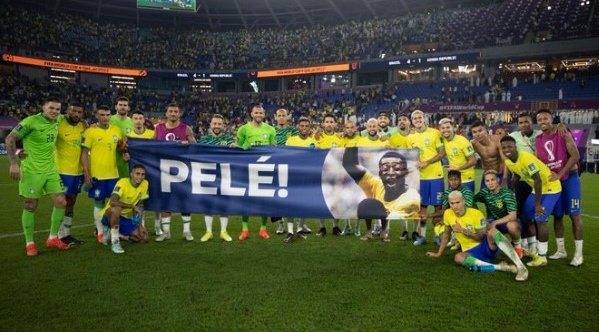 Brazil annihilated South Korea in their 2022 Qatar World Cup ’round of 16′ match to tee up a quarter-final with Croatia.

South Korea met Brazil in the Stadium 974 in Ras Abu Aboud on Monday, December 4, in the knockout stage of the 2022 Qatar World Cup. The prize for the victor was a quarter-final clash with Croatia who, earlier in the day, defeated Japan on penalties.

The Asian side had beaten Portugal 2-1 in their previous match so they came into this encounter knowing anything was possible. Unfortunately, they met a Brazilian team who on this showing, look to be dead certs to lift the trophy this time around.

Tite’s selection included 30-year-old Neymar Jr, back from an ankle injury, which only added to the carnival atmosphere inside the stadium.

Brazil produced without a doubt the tournament’s best football yet as they romped to an easy 4-1 victory over a very poor South Korean team. Vinicius Jr started the rout after only seven minutes. The Real Madrid star curled a magnificent shot straight into the top corner of the goal from the edge of the penalty area.

A penalty awarded in the 13th minute when Woo-Young Jung was judged to have fouled Richarlison, gave Neymar the opportunity to move just one goal behind the legendary Pele. He slotted the ball away in the calmest manner imaginable to double the lead.

Arguably the goal of the tournament was produced by Richarlison after 29 minutes. Juggling the ball on his head, the ball was laid it off to Marquinhos. He passed it to Thiago Silva, who delivered a killer pass back to the Tottenham striker who placed the ball sublimely beyond  Kim Seung-gyu for 3-0.

West Ham’s Lucas Paqueta scooped Vinicius Junior’s pass home in the 36th minute to give Brazil their fourth. Such was their command in the second half that Tite could afford to replace Allison and bring on his third-choice keeper Weverton with 10 minutes remaining. That made Brazil the first team to use all 26 squad players at this World Cup.

A beautiful strike from 25 yards by Seung-Ho Paik at least got Paulo Bento’s side on the scoresheet. The 61-year-old coach announced his retirement from the national team after the match. Brazil will now face Croatia on Friday 9.