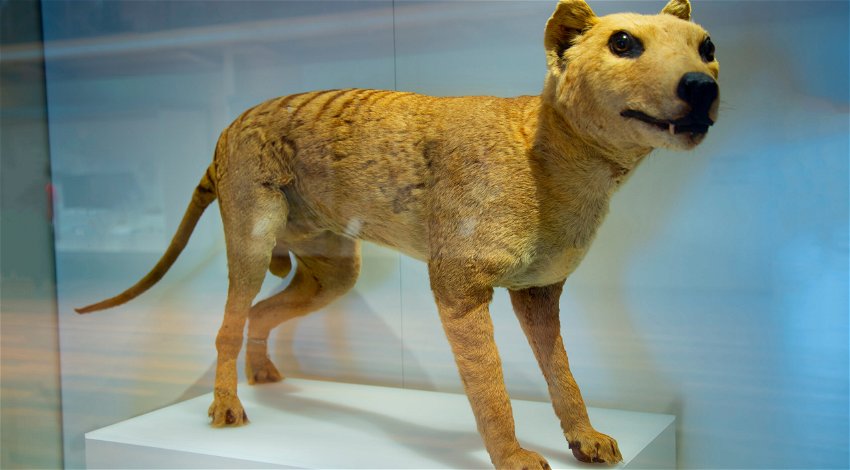 The remains of the last surviving Tasmanian tiger have been found stashed in a cupboard in an Australian museum – 85 years after its death.

The animal, also known as a ‘thylacine’ or a ‘Tasmanian wolf’, wasn’t declared extinct in the 1980s following the death of the elderly female kept at Beaumaris Zoo in the Australian island’s capital city of Hobart, in 1936.

The Tasmanian tiger was the only predatory marsupial on the island of Tasmania; around 600 kilometres south of mainland Australia’s southern coast.

The animals displayed characteristic stripes across their backs, reminiscent of a tiger’s.

Following the death of the last surviving member of the species in captivity in 1936, the whereabouts of the animal’s remains remained a mystery for nearly a century.

But the long sought-after remains were shockingly rediscovered recently at the Tasmanian Museum and Art Gallery (TMAG), where the animal’s remains were transferred following its death.

Researchers at the museum said the remains had been searched for ‘for years’ without success – until they were recently found in a cupboard at the museum.

The ‘bittersweet’ late discovery of the remains – which the museum had presumed to have been ‘discarded’ – was prompted following the finding of an unpublished taxidermists report.

The newly discovered report led to an investigation of the museum’s collections, which culminated in the discovery of the thylacine remains in a cupboard in the museum’s education department.

The remains were said to have been taken into schools across Australia for children to study – but it was never known these were the remains belonged to the last surviving Tasmanian tiger.

Dr Robert Paddle, a comparative psychologist from the Australian Catholic University, explained that the tiger’s purchase from a hunter in May of 1936 hadn’t been recorded due to the ‘illegal’ method of its capture.

Dr Paddle said: “The sale was not recorded or publicised by the zoo because, at the time, ground-based snaring was illegal and [the trapper] could have been fined.

“The thylacine only lived for a few months and, when it died, its body was transferred to TMAG.

“For years, many museum curators and researchers searched for its remains without success, as no thylacine material dating from 1936 had been recorded in the zoological collection, and so it was assumed its body had been discarded.”

Kathryn Medlock, Honorary Curator of Vertebrate Zoology at TMAG, added: “The thylacine body had been skinned, and the disarticulated skeleton was positioned on a series of five cards to be included in the newly formed education collection overseen by museum science teacher Mr A W G Powell.

“The skin was carefully tanned as a flat skin by the museum’s taxidermist, William Cunningham, which meant it could be easily transported and used as a demonstration specimen for school classes learning about Tasmanian marsupials.”

Mary Mulcahy, the TMAG museum’s Director, said she was glad the last Tasmanian tiger’s remains were ‘finally’ on display at the museum.

“It is bittersweet that the mystery surrounding the remains of the last thylacine has been solved, and that it has been discovered to be part of TMAG’s collection,” Ms Mulcay said.

“Our thylacine gallery is incredibly popular with visitors and we invite everyone to TMAG to see the remains of the last thylacine, finally on show for all to see.”

The remains of the Tasmanian tiger will go on display at the Hobart museum alongside fellow extinct animals such as the Carolina parakeet and passenger pigeon.

A paper on Dr Paddle and Ms Medlock’s findings will be published soon in the zoological journal, Australian Zoologist.