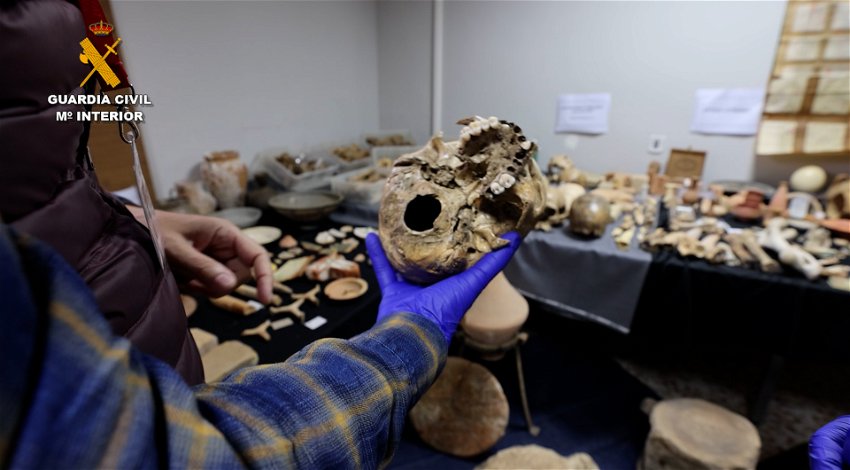 Two men are under investigation by Spain’s Guardia Civil after Operation Osarium led to the seizure of one of the largest illegal private collections of archaeological artefacts and skeletal remains in Alicante.

Guardia Civil’s Operation Osarium began in November after officers learned through the local police of Gata de Gorgos that there was various ancient bone remains inside a local house.

With the help of an archaeologist from Jávea Town Council, the bone remains found in the house in Gata de Gorgos were dated between 4,000 and 5,000 years old.

The “need to catalogue the archaeological pieces found” and due to the age of most of the items, a court in the Valencian Community deemed the collection to be illegal, as it did not have “any document to support its possession,” the Guardia Civil wrote in a report.

However, the house in Gata de Gorgos was not where most of the archaeological artefacts and skeletal remains were found.

A much larger collection was discovered in a home in Alicante’s Denia.

Inside the property, officers found a large volume of archaeological and palaeontological pieces.

According to the report, the owner of the house claimed that he had inherited the collection from a deceased relative.

However, police declared that as he did not have any kind of documentation to justify their possession and had not taken any steps to declare them, the items were seized by the officers.

Among the items seized in this house, the following stand out:

Five amphorae of Betic, Phoenician and Punic origin.
Five Bronze Age and Neolithic mills.
Five weights from a loom from the Ancient Roman period.
A human skull.
An iron grenade and various cannonballs from the 18th century.
More than 1,000 tesserae forming mosaics from Roman times.
Various ammonites and nautilus fossils.
Ceramic material from the Bronze Age to the mid-20th century.
Various Roman ointments.
Palaeolithic flint tools.
Half sword from the 12th century.
Archaeological fauna and malacofauna.
Roman laterite material and a large number of fossils.

Police officers also found a large number of notebooks, all of them handwritten by the deceased relative containing notes on the exact locations where the seized items were found.

After seizing the goods from the men, police sent them to be studied by specialists to determine the date of origin.

In the report, the Guardia Civil said that as the items could be valuable, new archaeological sites could be paid for using the profits.

The volume of archaeological and paleontological pieces found required the assistance and collaboration of the Archaeological Museum of Dénia belonging to the Social and Cultural Area of the Dénia Town Hall, which enabled a suitable place for their conservation, the report concluded.

The two men are being investigated by police for the alleged misappropriation of historical, cultural and scientific goods.