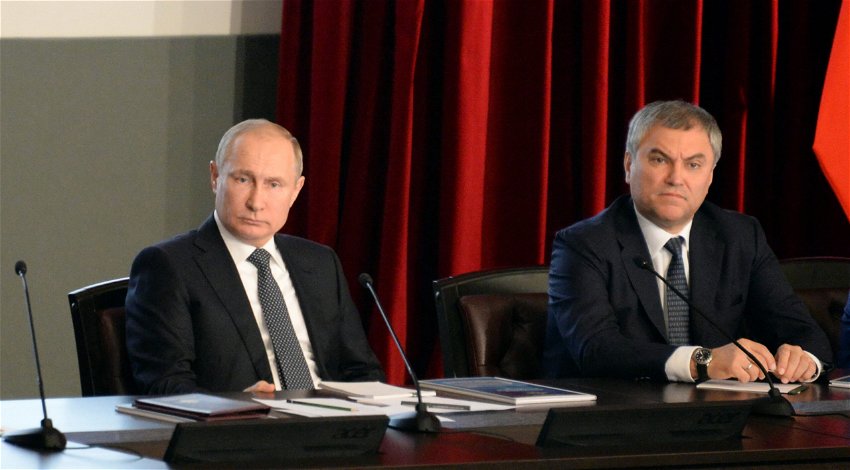 The speaker for Russia’s State Duma said “what is dead cannot die,” as he claimed ‘downgrading Russia’s diplomatic relations with Latvia and Estonia was long overdue’.

He added: “The leaders of the Baltic states have been saying for 30 years that they are building independent states.

“In reality, all decisions are made in Washington and Brussels. Sovereignty is lost.

“The interests of the people are ignored.

He claimed that the “ruling regimes in these countries excel at Russophobia” and that the leaders of each of the countries “are competing to see who will be the toughest on Russia.”

“In the Baltic states, human rights are violated more than anywhere else: national minorities are infringed, mother tongues are banned, independent journalists and human rights activists are persecuted,” he said.

“Cooperation with these countries is impossible because they have lost their independence.”

“The decision to downgrade diplomatic relations with Estonia and Latvia should have been taken long ago,” he concluded.

On January 23, Latvia and Estonia both asked their respective Russian ambassadors to leave Russia.

The Russian Foreign Ministry, having significantly reduced the number of staff in its Tallinn embassy, summoned Margus Laidre, the Estonian Ambassador on Monday, January 23. He was asked to leave the country by February 7, downgrading the diplomatic level with Estonia to charge d’affaires.

Hours later, Latvian Foreign Minister Edgars Rinkevics announced that the country would lower the level of diplomatic relations with the Russian Federation as a sign of solidarity with Estonia as of February 24, 2023, the anniversary of the start of the Russian special operation in Ukraine.