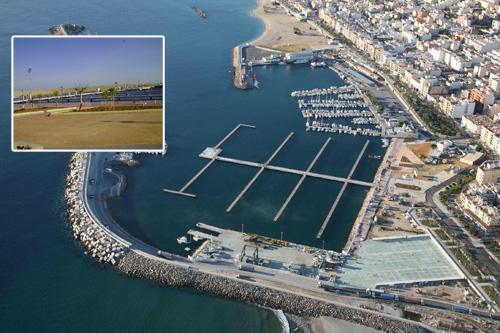 THE MARINA (Puerto Deportivo) is set to open this week in Garrucha.

Local people and tourists went out in the sunshine last weekend to try out the new walkways despite barriers and no entry signs still being in place.

In addition to more than a hundred parking spaces and 336 moorings for private boats there is a green area with plants and trees and a pedestrian area by the sea.

The marina which took 11 months to build and the cost of more than €4 million does not include the tunnel being built at the edge of Garrucha near Mercadona and the temporary traffic lights.

This underground access road for lorries is a separate project and it is unknown when, or if it will be completed.

A source who asked not to be named has confirmed that the tunnel won’t be completed this year. However, there are plans to return the roads and pavements to their original state by April so that pedestrians and traffic can circulate as before.

A Port office employee commented that the marina “seems very good so far,” adding “we’ll soon get a better idea, now it’s up and running.”

A percentage of the final payment for the marina will remain as a deposit with the Junta de Andalucia (regional government) for a year to cover the cost of putting right any imperfections.

The worker’s opinion was echoed by a young Andrew Bromley-Wilson, aged 10, of Wickford, Essex who lives in Garrucha, “It’s improved a lot,” said.

“I’ll be able to come down here with my family on my scooter. It’s great.” The paved area used to be an abandoned strip covered in rubbish.

Most of the workers involved in the marina’s construction were local people and now that it’s completed, a number of maintenance jobs will also be created for locals workers.

In addition, there’s an area where shops and restaurants will be built and there has already been quite a lot of business interest, according to the Port Authority.

The majority of non-Spanish boat owners that have applied for the use of moorings are British. Some of the applicants want to move their boats from other more crowded moorings whilst others have been waiting for the marina’s completion in order to buy boats.

A total of 201 applications have been accepted from people of several nationalities, including French, Dutch and German. At time of going to press it was not known whether an official opening ceremony was going to take place but the Port Authority confirmed that the barriers are to be removed this week.

For information on short and long-term moorings see the bilingual webpage: www.eppa.es which can also be viewed free of charge 24 hours a day on the multilingual computerised information point near the anchor at the edge of the marina.