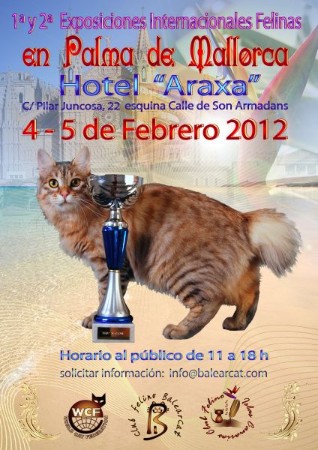 There’s a treat in store for Mallorca cat lovers. Balearcat, the new local cat club, affiliated to the the World Cat Federation has joined forces with its counterpart from the Canary Islands and is holding their first Cat Show in Palma this weekend (4th and 5th February).

The Club has been overwhelmed by entries from as far away as Russia, Germany and the Canaries for this two-day event and so there will be an amazing range of fabulous cats waiting to be admired.

The show will be open to the general public each day non-stop from 10 a.m. to 6.30 p.m.. It’s to be held in the luxurious Hotel Araxa, just down from the Pueblo Español and not far from the Anglican Church.

For those who have never before attended a cat show, here’s what happens. The cats are penned individually or in family groups and the owner/breeder will be nearby.

In the morning of each show day, they are taken up to the judges to be judged against the “standard” for their breed.

The standard is a description of what the ideal cat of each breed should look like.

Eyes, ears, nose, chin, tail …. each feature is scrutinised and the judge writes an assessment, before awarding the cats their certificates. From one show to another, cats work their way up the scale of titles.

As beginners, they compete for Championship certificates gaining the title of Champion when they have won three.

The next stage requires three more certificates, which must be won in a minimum of two different countries, making them into an International Champion.

Then, they can try to win 6 more certificates to become a Grand International Champion.

And finally, for the crème-de-la-crème, with 9 more certificates to their name, they can become Supreme Champions.

If you do the maths, you’ll see that a cat has to win their class at 21 different shows to finally get this top honour.

Only a very good cat and a very dedicated owner will make it through. In the afternoon of each day, the system changes and the cats compete amongst themselves for the BIS or Best in Show.

During the morning’s assessments, each judge will nominate the best cat from each breed and colour group to compete.

The judging panel will then decide which of these nominees will be given the titles : Best Male Longhair, Best Female Semi-Longhair, Best Neuter Shorthair and so on.

And at the very end, a choice will be made between the titled cats. One cat will become Best of the Bests and one breeder will go home very happy.

There’s a lot to see, so plan to spend several hours at the cat show. You might even have lunch there as the hotel is catering for everyone’s appetites.

Talk to the proud owners of the cats and they will be happy to tell you all about their chosen breed.

If you’ve been toying with the idea of getting yourself a furry friend, this might be the perfect opportunity to look at candidate kittens and learn the characteristics of each breed, before you decide what is right for you.

Don’t assume that all cats are the same. Some breeds are more active and some more indolent ; some are more independent and some are more “in-your-face” ; some will want to play a lot and share your daily routine, others will prefer to loll around and be decorative ; some will need a lot of grooming and others will care for their own coats. It’s your choice !

When you buy a pure bred cat or kitten you should expect it to have a 5-generation pedigree certificate issued by an official registry.

It should also have a vaccination certificate – or better still a pet passport – showing that it has been protected with vaccinations against feline gastro-enteritis and cat flu.

Check the dates to make sure that they are current. A rabies vaccination is also a plus, as it will permit you to travel outside Spain with your cat.

The other requirement for crossing the border is a microchip and that too should be included in the price that you pay for your cat or kitten. Of course, the chip also serves as a safeguard in case your new furry friend were ever to go missing.

When visiting the show, remember one very important rule : Don’t touch the cats without permission from their owner.

Although every cat attending a show has to pass through a “vetting-in” health check, there is still the possibility that a cat carrying something infectious could slip through.

If the public go from pen to pen stroking each cat then it greatly increases the chances of spreading something nasty.

The same is true of cat toys or anything else you might use to get a cat’s attention. If you use the same distraction for more than one cat then you are putting those cats at risk.

Especially important, don’t touch cats who are being carried to and from the judges’ tables.

Most cats are very calm and laid back about shows, but there could be one who is nervous and strange hands coming at him could be the final unsettling straw causing him to freak out.

For the same reasons, it’s also very important to keep visiting children under control. Parents should keep their children quiet and ensure that they don’t tease the cats.

It’s all a matter of respect.

Have fun and enjoy your day at the cat show and help others to enjoy it too. See you there !