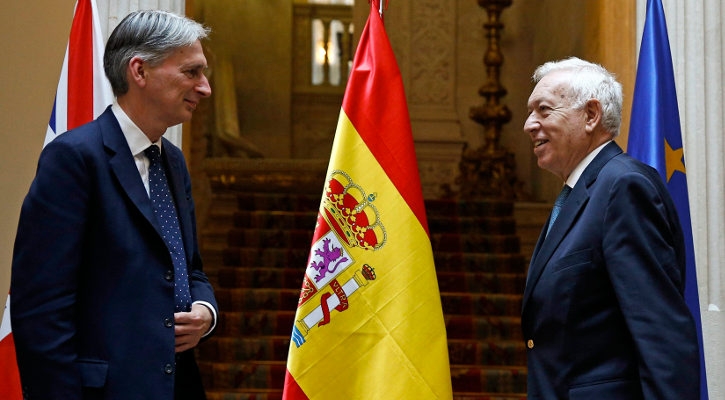 SPANISH Foreign Affairs Minister Jose Manuel Garcia-Margallo confirmed today (February 19) that controls at the Gibraltar frontier would not be relaxed, following a meeting with the British Foreign Secretary.

Although the controls cause long queues to enter and leave Gibraltar, the minister insisted that they would not be relaxed as he considered that Spain’s duty was to fight smuggling.

British Foreign Secretary Philip Hammond visited the minister in Madrid today, and Gibraltar was among other items on the agenda.

Both stressed that they were looking for ways to create new dialogues between Spain, the UK, Gibraltar, the Junta de Andalucia regional government and Campo de Gibraltar representatives, without getting stuck on sovereignty discussions.

Garcia-Margallo blamed the Gibraltar government for delaying these so-called ad hoc meetings due to the fact that elections are coming up on the Rock.

The British government proposed the ad hoc meetings in 2012, although the initial plan was to maintain the tripartite system between Madrid, London and Gibraltar that was used in the times of Spanish socialist PM Jose Luis Rodriguez Zapatero, which the current government has buried.

Spain accepted the proposal with one condition: that the meetings are never held solely between the three groups. In other words, if Gibraltar needs to be present then the Junta de Andalucia and Campo de Gibraltar representatives do as well.

Spain firmly rejected a tripartite system that would give Gibraltar a similar status to the sovereign states of Spain and the UK.

Meanwhile Hammond confirmed the British government’s support of the three-sided talks, but announced that his Spanish counterpart had made a proposal to advance on the ad hoc meetings that London would discuss with the Gibraltar government.

The head of the Foreign Office said he hoped that the meetings could be held in the near future.

Garcia-Margallo also said he was sure the first meeting, to be held in Brussels with the European Commission invited to attend, would take place soon.

The idea is for the meetings to cover matters including environmental protection of disputed waters and the queues at the frontier, amongst others.