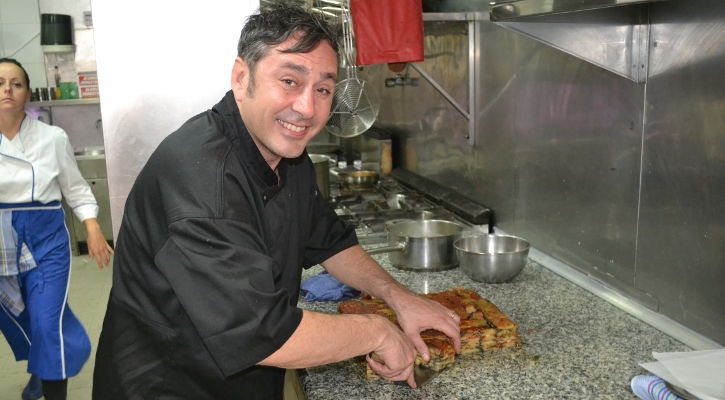 WALK into Cibo Italiano restaurant on Marbella’s Golden Mile and the care and attention put into creating this stylish eatery is immediately apparent. Beautifully designed down to the last detail it is a pleaure to sit in.

First impressions count, and Cibo does not let you down. Like all good restaurants the surroundings reflect the most important aspect of the dining experience – the food. Like the décor, it is top class classical Italian food but with a modern twist and with those final touches that turn good food into something special.

The ethos of care and attention comes straight from chef/partner Lorenzo Otterburn. With his 25 years experience working with the likes of Gordon Ramsay and Marco Pierre White, as well as at the Walnut Tree, he has the knowledge and skills to make the food at Cibo something special and different from so many other Italians on the Costa del Sol.

Already well known in the area for his La Casita Restaurante in La Heredia on the Ronda Road, he decided to take a sabbatical during 2014 to return to London and brush up on the latest culinary trends. He worked at the Hawksmoor – widely acknowledged as one of the best grill restaurants in the world – then headed off to party island Ibiza to the exclusive private island of Tagomago. There he catered for the superstar likes of Cristiano Ronaldo and the Rolling Stones

After his culinary break he decided to return to Marbella, as he said: “Motivated and enthused to try something new.”

He said: “The whole idea is to offer good simple food without trying to be too clever or expensive. In short we want to give good food at a good price for good people.”

He added: “The watchword in fashion in recent years has been ‘hippy-chic’ and that is what we want to bring to the dining experience.

“We want to put the informality into it. Every dish we serve is home-made, from the bread and pasta to the pizzas and even our own home cured duck ‘ham.’ We want people to feel they have had a good dining experience.”

That philosophy is clearly shown by the outstanding food. The top quality ingredients are enhanced by the cooking and not overwhelmed by fancy and, for want of a better word, unusual sauces. Care, thought and attention has gone into every dish, and the use of a Josper charcoal fired oven for the grills and pizzas adds a delicious flavour to the dishes.

The presentation of the meals is also superb with specially imported wooden serving platters giving an unusual touch. Stars of the menu include chargrilled lamb chops with a mint pesto, home-made lobster ravioli and the chargrilled chuleton bone in rib steak. There is a wide selection of dishes including pizzas and pasta, fish and meat, as well as a children’s menu. Every dish tried from the pizza to the lamb chops was cooked to perfection. And the prices? Well they offer great value, especially for the Golden Mile. The top quality dishes are not sold at the sort of price premium you would expect from a chef of Lorenzo’s stellar background.

You may find cheaper, but certainly not at the quality on offer. And you won’t find the quality elsewhere at these prices.