“Where there is discord may we bring harmony” 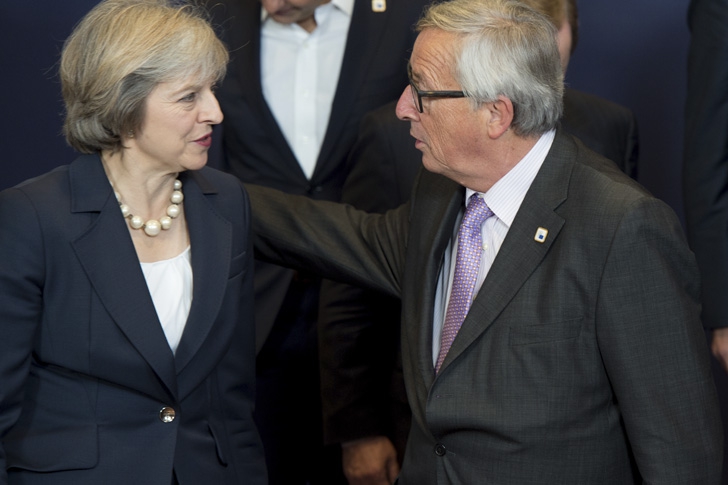 Theresa May with Jean-Claude Juncker.

NOT, it would appear evoking the spirit of Francis of Assisi or even Margaret Thatcher, Theresa May decided to meet with the leaders of the devolved parliaments of the United Kingdom on October 24 soon after her return from a meeting with the other 27 members of the European Union in Brussels.

IN A bid to show the regions that the government would not go ahead with Brexit without appearing to take notice of their wishes, Theresa May called a meeting of the joint ministerial committee which brought together Mrs May and Brexiteer in Chief David Davis with Scottish First Minister Nicola Sturgeon, Welsh First Minister Carwyn Jones and Northern Ireland’s First Minister Arlene Foster and Deputy First Minister Martin McGuinness.

Basically, the Scots and the Northern Irish agreed to disagree with the government as Mrs May wants Mr Davis to chair a forum which would bring together representatives of the devolved nations as the government triggers Article 50 of the Lisbon Agreement, whilst they say that it should not be considered until the four constituents of the UK agree a policy concerning intended negotiations.

Ms Sturgeon insisted that she had been told nothing new or definite about future intentions and was still intent on considering calling a second Independence referendum in the event that the Scottish wish for a continued relationship with the EU was ignored.

Whilst not quite as obviously peeved as the Scottish First Minister, Ms Foster also made it clear that the people of Northern Ireland expected to be heavily involved in any negotiations involved with the Brexit decision.

Whilst it would appear that the current government position is to treat the Scots and Northern Irish as interested but remote parties, there is a long way to go before a final decision will be made and they could cause a great deal of upset if they are treated as ‘second class citizens’.

Downing Street has however asked that all parties show unity and do not undermine the UK’s position at this early stage in the proceedings.

This is one story that promises to run and run.