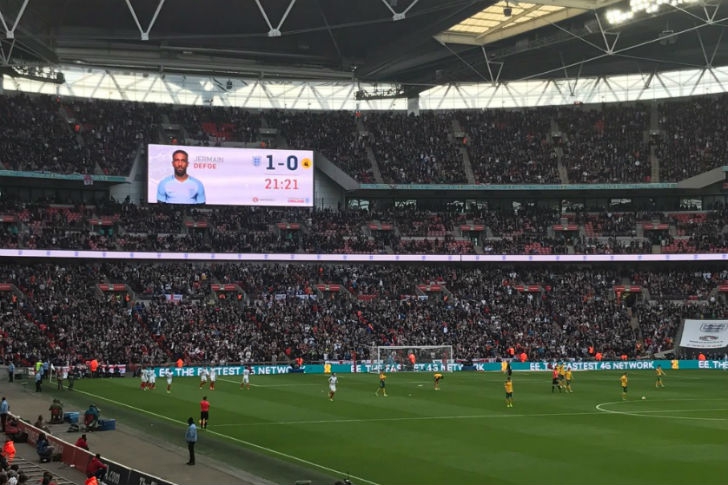 RECALL: Defoe was back in his first cap since 2013

LAST night (Sunday 26) saw England, Scotland, and Northern Ireland all push past their opponents to remain in the race for World Cup qualification.

In his first international appearance since 2013, 34-year-old striker Jermain Defoe scored the opening goal to put England 1-0 up against Lithuania after just 21 minutes. Southgate’s decision to recall Defoe to the squad had raised a few eyebrows, but his inclusion made perfect sense considering his run of goals and assists for Sunderland this season.

England dominated the first half, giving Lithuania very few chances to put the ball past keeper Joe Hart. The home side had a great chance to double their lead just minutes into the second half, but that second goal didn’t come until the 66th minute, when substitute Jamie Vardy slotted past Setkus. England saw out the closing stages of the game with ease, extending their lead at the top of Group F to five points.

Elsewhere, Northern Ireland gave a convincing performance against Norway, with Jamie Ward putting them ahead within two minutes. Conor Washington then went on to consolidate their lead with a cool finish. The side are ahead of Ukraine in third place in Group C. This was Northern Ireland’s third successive win at Windsor Park as they continue to impress on the international stage.

Scotland was in action against Slovenia at Hampden Park, but made life difficult for themselves, eventually taking the three points with a late goal, to remain fourth in Group F.

The game was littered with missed chances which seemed to take their toll on an already tired Scotland, the team losing some of its motivation and attack in the second half. As time began to run out, Chris Martin kept his cool up front to rifle a shot into the top right hand corner in the 89th minute.

Closer to home, Gibraltar continued their streak of bad luck with a 5-0 thrashing against Bosnia and Herzegovina to remain bottom of Group H. The teams will be back in action in June, when Scotland take on England, Northern Ireland travel to Azerbaijan and Gibraltar play host to Cyprus.