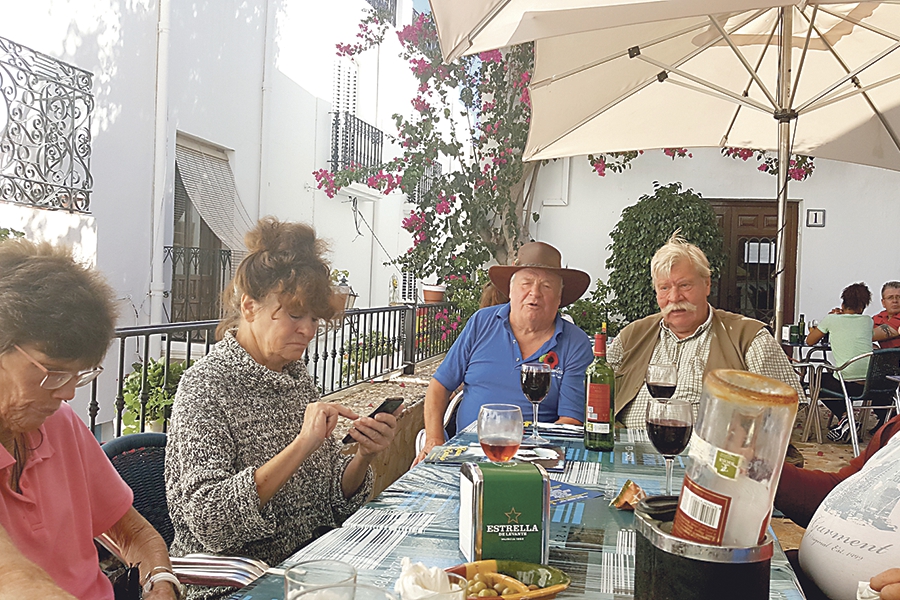 AS if someone waived a magic wand parking spaces have opened up, traffic has diminished drastically and you can once again walk into favourite watering holes and restaurants without booking in advance. And, as if to put the jewel in the crown, we beach folk can once again visit our enchanted village.

My Saturday outing was organised by Mojacar’s first foreign lady, French Dominique whose town presence was well already established even before I arrived in ‘69. An invite is usually shouted across the street or plaza, “come along we’re all going for tapas and drinks at Rincon de Embrujo, meet us there.”

Everyone within shouting distance is alerted. It becomes a village party. What was initiated as an outing of a few friends turns into a circus parade of local villagers. Within moments of seating we are a boisterous bumptious riot of people not caring what anyone else thinks of our noise, profanity or well-being. Some tables scoot away. Others stand and leave making a purposeful journey to the open nearby church.

We dine next to the pristine marble statue of the Mojacar lady. As the party heats up our noise increases with the rattle of new bottles arriving.  Passers-by stop, linger a bit and trundle off to other places. One Manchester Dave saunters up taking off his cowboy hat and asks if he owes anyone an apology for his last night’s antics – before he sits. I like him. He is the living ghost of so many from 50 years ago.

The decibels at our table increase proportionately as the wine is diminished.

Eating frenzies soon get filled. We are not en situ for more than a hour when we are all worn out from shouting, smiling and talking trash to each other. Not a drop more drink fits. It is time to close down and go for a siesta. I asked for the la cuenta.

The table grows quiet. For what we have drunk and wolfed  back it is a pittance but bitching immediately ensues claiming others ate more, drank quicker and shouldn’t be punished if they didn’t want dessert.

The bon vie is gone. Snarls abound. Some shovel my way a few Euros. No paper money is produced. I repeat again but am responded with the same growling and snippets of displeasure. Parties are OK, paying for them is not. In the end the physical largest paid more than the smallest. Wouldn’t Darwin like to know about that?