Cooking for the Football Legends! 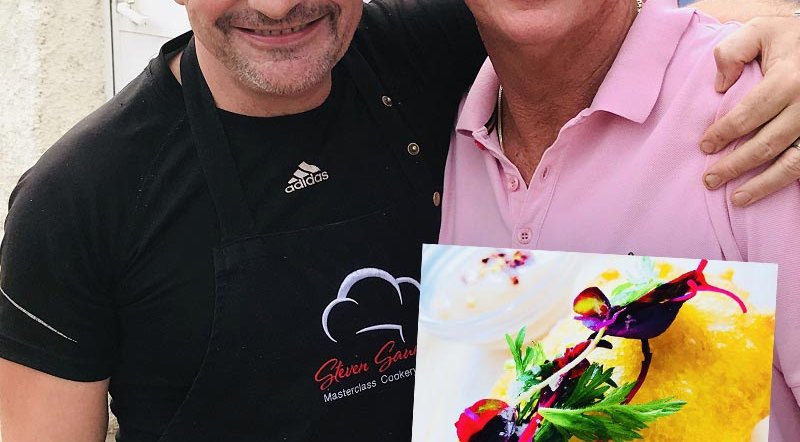 AS the Champions League football competition draws to a close, I remember cooking for some of the world’s most famous footballers.

When I opened The Lowry in Manchester (which was connected to the Old Trafford football ground) one of my first clients was David Beckham.

I will never forget him asking for Heinz ketchup to accompany his fish and chips and rejecting my own homemade tomato sauce!

One of my chefs said, “Chef you said that you would never buy a bottled sauce?” “It’s for David Beckham” I replied… and off he ran to a local shop to buy it!

Paul Gascoigne used to be a regular at my boutique hotel and restaurant near Cambridge (Sheene Mill). Paul was famous as an England and Newcastle player but probably better known for crying when he received his second yellow card ensuring that he would not be playing in the World Cup Final in 1990 even if England had got through.

He had burst into tears on the pitch; England fell in love with him and football once again, as post 1966 we had given up all hope!

Paul came for dinner and ordered the veal chop. We had ran out and the staff didn’t want to break the news to him, “It’s Paul Gascoigne” they said “how can we tell him that we are out of the special?”

I said that I would go and see him. I walked over to table five and broke the news saying “Hi Paul I’m sorry but we don’t have the veal you ordered but I do have some amazing beef.”

He looked a bit unhappy and I didn’t mean to say it but it came straight out….”Please don’t cry!” I said.

He laughed out loud and so did the tables next to him. When I went back into the kitchen they all asked me what I had said to make everyone laugh.

One boozy night after dinner in London I was drinking with Frank Lampard and his wife Christine Bleakly. My wife Michele knew Christine from Belfast where Michele had lived for 14 years.

I knew her when she presented dancing on ice, when she had once interviewed me.

After at least six G+T´s Frank started to talk about money and I couldn’t believe how much footballers get paid!

Then the bill for the drinks came and Michele put down the card to pay. “Sorry Steve but we came out without any money” Frank said, “like the Queen!” I replied.

A regular at The Little Geranium is Mark Clattenburg the premiership celebrity referee. His wife Claire loves our tasting menus and I cooked them a surprise tasting menu with about seven courses, like I do for many of my clients.

Mark said “the food was fantastic but where was the fish and chips course?”

He was joking but deep down I think that a mini fish tempura with fries might have gone down well!

Finally, we often see football legend Trevor Francis who was the first Million Pound footballer, dining at The Little Geranium. Whenever anyone mentions the Million Pound player he says “I played professional football for 23 years until I was 39, I won European Cups with Nottingham Forest, I played 52 times over nine years for England, but whenever anyone talks about me, I’m always introduced as the first £1m footballer!”

Lol…I’m always introduced as the chef from Ready Steady Cook, no one mentions any of my awards, so I know how he feels! Anyway here is the fish tempura recipe that legend David Beckham loves!

200g of Tempura Flour (from most supermarkets)

A few cubes of ice

A table spoon of olive oil

How to make the Tempura batter

Mix together lightly with a spoon and do not whisk so that you have a lumpy mix which is what we want here.

Important: Do not mix it too much as you will get a lot of gluten which makes it heavy and creates an un-crispy tempura batter – it should resemble lumpy cream.

Some plain flour for coating the fish

To cook the fish

Toss each fillet through some plain four to coat

Now dip the fillets one at a time into the batter holding the corner of the fish and allow batter to drip off for a few seconds.

Place carefully in your hot fryer on full power.

Cook for about three minutes or until golden brown

Remove and season with Maldon salt

Only cook two fillets of fish at one time or else the temperature will fall too much and start poaching not frying. In addition, if you overcrowd the fryer the fillets will stick to each other!

For the pea puree

Bring a large pan of salted water to the boil, blanch the peas for two minutes and add the mint leaves.

Add the peas to a blender along with a little of the water they cooked in. Blitz the peas in a food processor until desired consistency.

Taste and season with salt