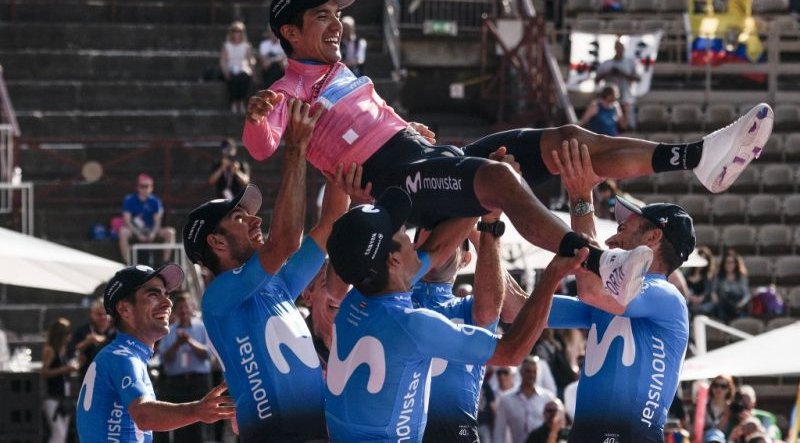 He kept a cool head to defend his lead on Sunday’s final stage to maintain an advantage of 1’05” over Italian Vincenzo Nibali while Slovakian Primoz Roglic regained his spot on the podium at the expense of Spaniard Mikel Landa.

Carapaz, his nation’s first winner of the race, later said: “I’m very proud of what I achieved. I’m delighted to make my dream of winning a Grand Tour come true. We must never forget our childhood dreams. They can always become reality with hard work and determination.

“In my four years in European cycling, I realised that opportunities have to be caught. The 30 seconds I gained on stage 15 were fundamental. I profited from [Vincenzo] Nibali and [Primoz] Roglic watching each other. That’s where the Giro was decided. For me, it’s only the beginning, I think. We always dream for more.”

Second placed Vincenzo Nibali said: “This morning, I knew it would be extremely difficult to win the Giro d’Italia. But I thought I could do a good time trial. So I gave it all until the end. Second at the Giro is still a good result, especially thinking that six months ago, I was down with a big back pain after the crash at the Tour de France. To be back fighting for the overall victory in a Grand Tour is something positive.”

The stage winner Chad Haga said in the press conference: “It’ll take a bit longer to realize but it’ll come. My victory is of course a consolation price after Tom Dumoulin pulled out. I came in top form but it was a support form. During the time trial, I kept thinking this is what Tom would have been doing today if he was here. I thought today I had a real possibility because the course suited me very well and for sure better than the one of stage 9. As an American, I feel very proud of winning a stage at the Giro d’Italia.”

Points Classification winner Pascal Ackermann said: “The atmosphere in the arena is fabulous. I have never experienced anything like this before. It makes me feel special about the getting the Cyclamen jersey, which was a childhood dream. Coming to the Giro, I was only hoping for a victory but after I won two stages, it looked worth trying to go for the jersey as well. But I was very disappointed after my crash. I lost a lot of points but we kept working on getting it back. I wasn’t expecting what I’ve experienced over these three weeks and I’m just happy about everything.”