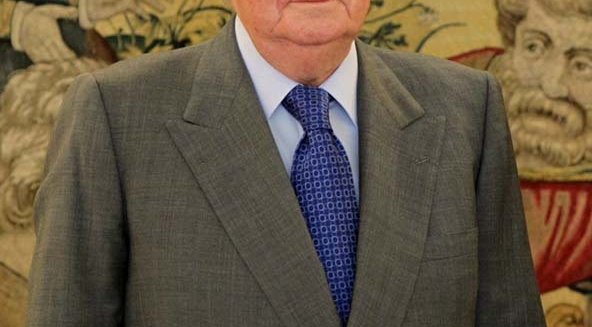 Juan Carlos I, will no longer take part in public life Credit: Wikipedia

SAD to say, although it’s no surprise, Juan Carlos I’s time is up.

He will no longer take part in public life, he announced.  And quite right too.

He was what Spain needed in 1975 after Franco died when he, Fernando Alvarez de Miranda, Adolfo Suarez and a few others piloted Spain into the safe haven of democracy.

He was what Spain needed when he pulled rank on military plotters and defused the attempted coup of February 23 1981.

But his usefulness is at an end and at 81 the Borbon king can lead a peaceful life hunting – elephants (possibly) included – with afternoons at the bullring and, who knows, the company of someone not his wife.

But Juan Carlos’s time is up and, always aware of what is needed, he knows he has nothing left to contribute and it’s time to go.

Err, no, Pablo.  He saved his skin by taking the two jewels in the Spanish crown by foul means, not fair.

Manuela Carmena and Mas Madrid were the most-voted in the municipal elections but the PP will have no compunction about teaming up with Ciudadanos to get into city hall, despite the bile on both sides during both elections.

And the PP will have even fewer qualms about getting into bed with Vox which is so far to the Right that it’s out of sight  this side of democracy.

Neither result is PP victory, they were Mas Madrid defeats.

PEDRO SANCHEZ and François Macron intend to attempt what, in the best of all possible worlds, should happen in Spain.

Although Sanchez is a socialist and Macron a liberal, they hope to join forces to prevent the European People’s Party – the Partido Popular to you and me – from taking over the European Commission.

With 20 seats, the Spanish PSOE has more than any other socialist party in the European Parliament and the same goes for Macron’s 21 Renaissance seats.

After 15 years of conservative domination, they want socialists and liberals to introduce a more progressive U agenda.

And all the while, Sanchez will be looking over his shoulder at Albert Rivera and Ciudadanos as if to say, “See, this is the way to do it.”

PROBABLY the biggest loser in the local and regional elections was the Podemos supremo Pablo Iglesias.

Podemos lost seats everywhere and instead of tipping the balance to the Left on councils and regional governments, in many cases it is handing that privilege to Vox.

Predictably, Iglesias continues to believe that he could, and should, occupy a seat in a future PSOE government in return for his 42 parliamentary seats.

His reasons are nebulous but his motives are as obvious as his sense of entitlement.