A lucky win for Alonso at the Toyota Gazoo Racing 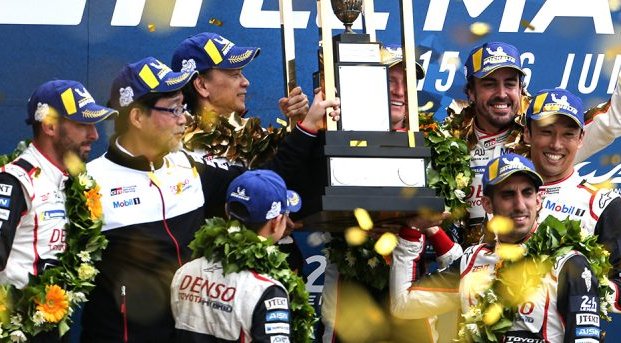 TOYOTA GAZOO Racing won the 87th Le Mans 24 Hours with a one-two finish – but their cars could be said to have finished in the wrong order.

In a dramatic final hour Sébastien Buemi, Kazuki Nakajima and Fernando Alonso, in the #8 TS050 HYBRID, defended their Le Mans crown and secured the drivers’ World Championship in the process, but only because of a huge slice of luck.

They ended up winning by 16.9secs from team-mates Mike Conway, Kamui Kobayashi and José María López in the #7 after the latter had to pit for a puncture. Unfortunately, their crew changed the wrong wheel in a blunder that robbed them of victory when they had to pit again to get the correct wheel changed.

Honda say a sensor malfunction caused the mistake on the 367th lap. They had held a lead of over two minutes before the double pit stop and a slow lap on a punctures wheel scuppered their hopes.

This meant Alonso and his teammates defended the Le Mans 24 hours they won last year, but had to admit luck was on their side. In any case they had the WEC Championship sewn up by that stage.

The #7 crew had controlled much of the contest, having set the fastest-ever Le Mans race lap of 3mins 17.297secs.

It had started the race from pole position following Kamui’s fastest qualifying lap, with the #8 starting just behind. That set the scene for an exciting and close battle for overall victory between the two 1,000PS TS050 HYBRIDs, with momentum swinging one way and then the other.

After 12 hours the two Toyotas were separated by only 8.6secs. In the night, the #7 seized a decisive advantage as the sister car faced an aerodynamic imbalance. That was caused by bodywork damage due to the rigours of a tough, flat-out contest although the cars were always on the same lap.

As the final hours approached, the gap remained relatively stable around two minutes and the focus switched to bringing the cars home safely. All appeared to be going to plan until the #7 experienced its dramas and Kazuki took the lead with less than an hour to go.

Fernando Alonso said: “It is amazing to win Le Mans for the second time but the win came really unexpectedly. We did not have the pace to win this race against car #7 on track. Today luck was a big factor and this is part of motorsport. I feel for my team-mates who are actually more than team-mates, they are friends.

“They would have deserved the victory, but the race chose us to win it. Our main goal was to win the World Championship and we are very proud that we have achieved this.”

Hisatake Murata, Team President: “We have an unusual feeling because we have won our second Le Mans but everyone in the team is sorry for Mike, Kamui and José and the #7 crew, who would have been deserving winners. We will investigate the exact cause of this issue in the coming days to avoid a repeat.

“Nevertheless, I am proud of the overall performance as well as the team spirit which we showed throughout the race, also in the difficult moments in the final hour. Congratulations to the new World Champions Sébastien, Kazuki and Fernando, also on their second Le Mans victory. This was a dramatic end to an incredible season for TOYOTA GAZOO Racing and we look forward to defending our titles next season.”