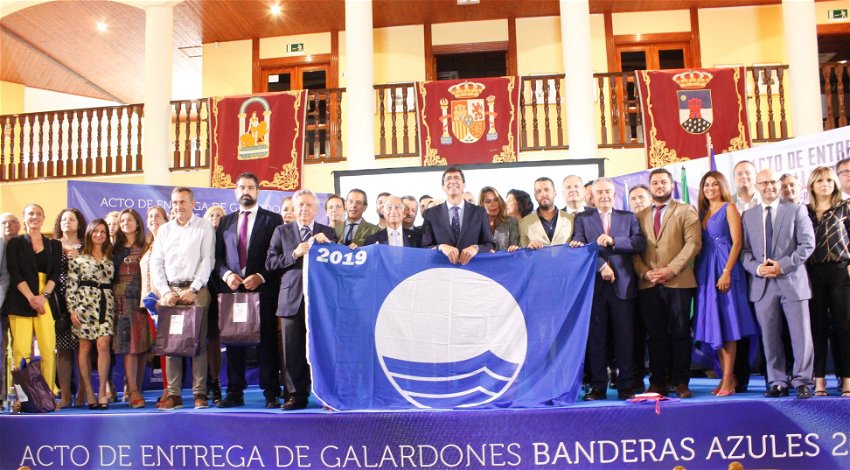 BLUE Flags for beach quality are vital for the province’s tourism industry, according to Andalucia government Vice-President and regional Tourism Minister Juan Marin.
Speaking at a ceremony last week in Roquetas de Mar’s Santa Ana castle to officially present the 27 recognitions Almeria’s coast has merited this year, as well as those for the rest of Andalucia, Marin insisted the awards are “key for maintaining our competitive position and for consolidating the confidence of those who visit us.”
The Junta de Andalucia Vice-President promised the administration would take steps to increase the number of the Association of Environmental and Consumer Education (ADEAC) quality recognitions flying on the region’s beaches next year. He argued the way to achieve excellence on the coastline has to be based on “sustainability, the responsible use of resources and good service.”
Marin also maintained the region’s beaches need to be open year-round for the enjoyment of both residents and visitors “in order to continue growing in a competitive environment”, pointing out this part of the world is lucky enough to have a climate which makes this possible.
He revealed his department is in contact with councils in coastal areas and with the ADEAC with a view to establishing a joint strategy for moving forward.
With 27 Blue Flags this year, Almeria has the second highest number among the Andalucia provinces, beaten only by Cadiz, which has two more. Almeria has 10 more than Malaga.
Blue Flags are flying on beaches in 10 Almeria locations this summer. Roquetas de Mar has the most with six.
“They demonstrate the quality of the water, the quality of the beaches, and the service of the men and women working 365 days a year”, affirmed Roquetas Mayor Gabriel Amat.
Roquetas is followed by El Ejido and Adra with four Blue Flags a piece, and Carboneras with three. Nijar, San Juan de los Terreros, Mojacar and Almeria city all have two of the beach quality recognitions and Villaricos and Balengra both have one.
The ADEAC awards Blue Flags to beaches and ports which meet a series of conditions, among them water quality, information, environmental management, safety and services.