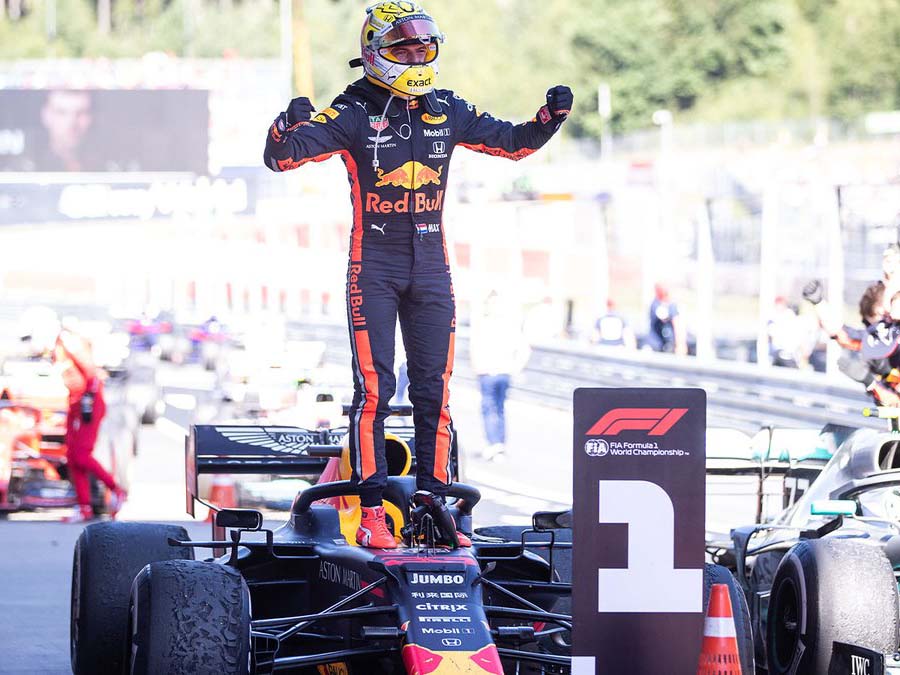 He needed all his skill and determination to steer his Red Bull to first position at the team’s home track following a dreadful start.

Verstappen’s march to his sixth career win, the Team’s 60th and the first for power unit partner Honda in 13 years looked scuppered at the off.

When the lights went out the Dutchman’s RB15 bogged down and he was immediately swamped by the cars around him on the grid. Ferrari’s Charles Leclerc powered away in the lead ahead of Mercedes’ Valtteri Bottas and Lewis Hamilton, Verstappen dropped to P7.

Ahead of the first round of pit stops Leclerc had built an almost five-second advantage over Bottas, who triggered what would be for most of the leading pack a single pit stop.

Bottas made a clean stop but there was no such luck for Vettel. The Ferrari driver’s crew were not ready with a set of hard tyres and the German was forced to sit stationary for six seconds as a front left wheel was located and fitted.

Leclerc made his stop at the end of the following lap and he emerged in P3 behind new leader Hamilton and Verstappen.

Hamilton pushed too hard and damaged his front wing. At the end of lap 30 he pitted for hard tyres and a new wing.

The stop saw Hamilton stand still in his pit box for 11 seconds. Red Bull responded and brought Verstappen in for a set of hard tyres and he emerged four seconds clear of Hamilton, in fourth place.

The Dutch ace quickly began to close up to third-placed Vettel and on lap 47 he closed to within DRS range of the Ferrari driver. On lap 50 he made it past, then took Bottas six laps later.

What followed was a titanic battle between Leclerc and Verstappen. With three laps remaining the latter made a move down the inside into turn three. The pair went alongside each other in the corner and banged wheels. Leclerc went wide on the exit of the corner and Verstappen was through.

Verstappen’s overtaking move on Leclerc was put under investigation by the stewards, but it was eventually judged to have been fair and Verstappen’s win stood.

Vettel had also been on the move during the closing stages and he passed Hamilton to take a solid fourth place after starting from P9. Hamilton was left with fifth place ahead of Lando Norris’ McLaren and Pierre Gasly crossed the line in P7 in his Red Bull to score his seventh points finish of the season to date.

Eighth place was taken by Carlos Sainz who finished ahead of the Alfa Romeo cars of Räikkönen and Antonio Giovinazzi.