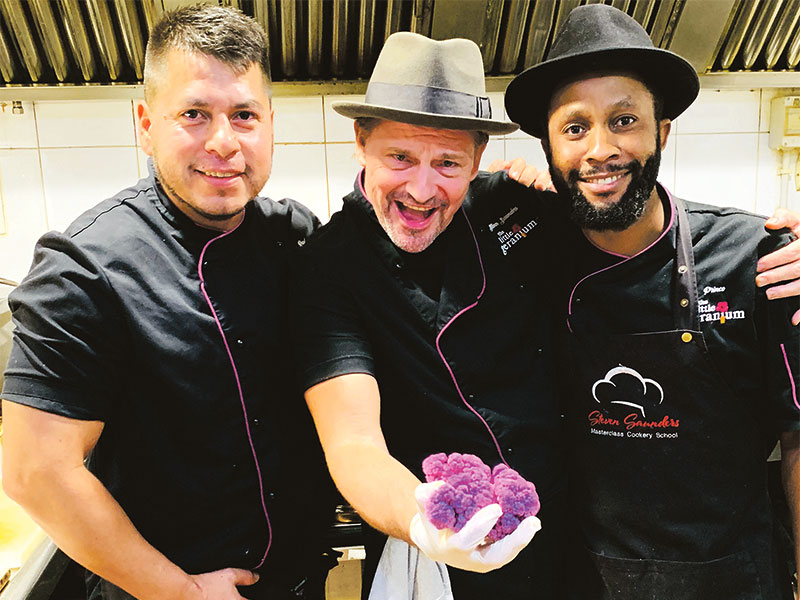 This week Celebrity & Fellow Master Chef Steven Saunders, proprietor of The Little Geranium in La Cala uses left over Halloween pumpkins to make a special soup for The Queen Mother!

POST Halloween we all seem to have a lot of pumpkins that we have bought and didn’t use, so don’t throw them away!

In a posh restaurant we call a soup a velouté! Why? Well simply because a velouté is usually made from stock made with some cream (a white stock) and a soup is a puree of vegetables.

But both are correct, however in this modern and slightly pretentious world we like to call a soup something a bit more elaborate when its more than a soup and this recipe is certainly worthy of that!

The first time I made it was for a Halloween party at The Savoy Hotel, London with the Queen Mother attending. The Executive Chef called me and said “Saunders, you have the amuse.”

So there is another word for you.  An amuse is the shortened version of the French word amuse-bouche or amuse-gueule which literally translates as ‘to amuse your mouth or throat!’

It’s different to an appetizer as it’s not something ordered from a menu; it’s something the kitchen sends you to get your taste buds working and to give us a bit of time preparing your first course!

So in effect I could send anything to the Queen Mum as an amuse, but it was a Halloween party and I wanted to send something with a Halloween theme.

I asked the others in the kitchen what the party was having as starter, main and dessert and was surprised that all the dishes sounded pretty normal, not Halloweeny at all.

“No pumpkin anywhere?” I enquired. “Nope ‘cos it’s a crap veg and no one likes it which is why they make faces out of it,” was their reply. Bear in mind… this was 1977!

So off I went to prove the bullies of the kitchen (and they were bullies) wrong and try and make something out of pumpkin. I started thinking along the lines of a mini caramelized pumpkin salad using the seeds also and then thought about a soup or rather a velouté!

To give the pumpkin some depth of flavour and a hint of sweetness I roasted it in cubes (peeled) until soft with a little olive oil and a touch of brown sugar and some spices.

I then pureed the pumpkin and made a vegetable stock, separately.  The vegetable stock must be packed with flavours so I used leeks, garlic, onions, celery, white mushrooms, carrots and bay leaves.

Then I blended the pumpkin and added some vegetable stock to it bit by bit to control the flavour and texture. I was shocked. It tasted amazing!

I could taste the slightly sweet pumpkin and the aromas of the vegetables and spices came through also.

It was smooth and silky and delicious but it needed something more to make it more like Halloween, maybe a spider’s web? So I made a black oil from black garlic and painted webs onto the top of each soup with the black oil in squeezy bottles.

Then I sent the soup, stopped, stood back and waited for a response. They cleared the amuse and sent the starter which was some kind of pear with blue cheese thing, it looked awful.

I waited for the feedback but it never came and the bully chefs said…”told you, pumpkin is S-t!” At the end of the meal the maître d asked the party to vote for their favourite Halloween dish.

Nearly 70 per cent voted the amuse! I was overwhelmed and shed a little tear. The bully chefs heard the news and said that they must have meant the first course because no one would vote for a pumpkin soup!

The maître d interrupted and said “Absolutely not. The guests and the Queen Mother have asked to meet the chef who made the pumpkin soup.”

I walked out into the Lancaster suite and everyone clapped. As I walked back into the kitchen the bullies threw pears at me. “Yes,” I said. “It’s the best thing for the hard old pears; you can’t eat them so you may as well throw them!” OMG I was in trouble now!

For the black oil