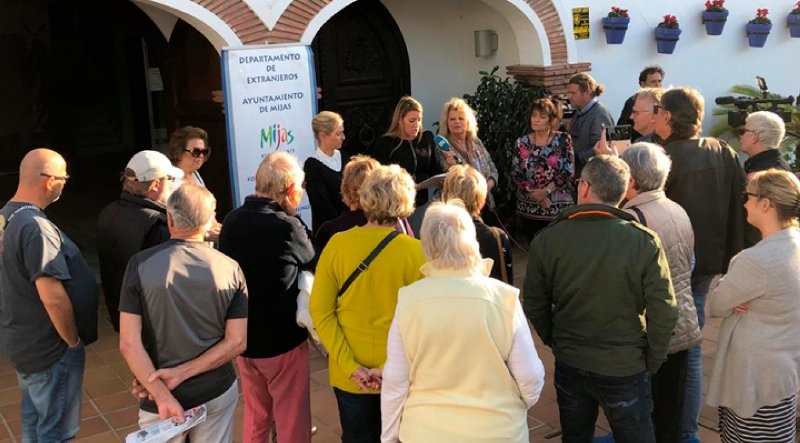 THE Mijas Foreigner’s Department led by Councillor Arancha López read a public statement in La Cala de Mijas on Brexit day, to show the support the council has for the British community facing Brexit.

“From the Mijas Town Hall, we want to speak to our British neighbours in the municipality to offer you all our support and affection. Because for us you are precisely that, our neighbours and a fundamental part of society in Mijas.

Today is a historic day due to the United Kingdom’s departure from the European Union. We know the uncertainty that this generates but we want you to know that we will continue to be there for you. Good coexistence, involvement in charitable causes, participation in events, and everything that we have learned from each other are the basis of this solid relationship that will never come to an end.

Some 8,900 British citizens reside in our municipality, this being the highest percentage of UK residents in Andalucia and one of the highest in Spain. You are a fundamental part of our local economy contributing to the revitalization of Mijas, both as regards residential and holiday tourism being, in both cases, the most numerous foreign nationality in Mijas.

We want to send you a message of tranquillity from the Town Hall and especially from the Foreigner’s Department. We are here to support you and help you in these moments of change that Brexit is going to bring about.

From the department, we will send you all the updated information through our mailing, and you will also be able to consult the Mijas Foreigners Department Facebook and Mijas Comunicacíon.

We want to thank the British Embassy in Spain and its Ambassador Hugh Elliot, the British Consulate in Malaga and Consul Charmaine Arbouin, for their close collaboration with this Town Hall.

We also thank the National Police, especially José Ordóñez Olalla, chief sub inspector of the immigration and border brigade, for his constant collaboration.

Our thanks to Mijas Comunicación and all the English media on the Costa del Sol for their support.

We want to especially thank the British associations and organisations in Mijas, especially Anne Hernández, founder of ‘Brexpats in Spain’, for her tireless and constant work helping everyone.

This is not a goodbye, not even a see you later, we will be by your side and we want you here with us in Mijas.”