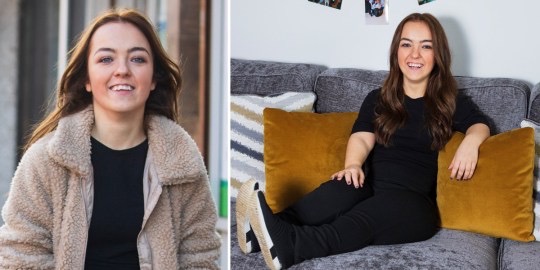 Woman with dwarfism has said she is sick of drunk people lifting her up in bars.

Danielle Reid, 22, is 3ft 11in because of achondroplasia, which means her torso is average length but her legs and arms are significantly shorter.

She says that when she goes out her condition means that she is mistaken for a child and struggles with things like automatic doors, as the sensors are too high to register she is there.

But one of the most upsetting things is the way people treat her – she says people stare, try to film her and often drunk people in bars try to pick her up. Danielle, from Glasgow, Scotland, said: ‘People in society treat me differently. I get people pointing at me and laughing, and taking pictures.

‘I’ve had people trying to lift me up – getting in my personal space. It’s amazing how people think they can treat me differently because I’m small.

‘It’s worse when people are drunk but there’s not a time when I go out of the house where people don’t stare, point, or take pictures. It happens every time. It’s horrible.’

Achondroplasia is a form of disorder of dwarfism where cartilage doesn’t change to bone, stunting the patient’s growth.

This means that Danielle’s limbs are shorter but her torso is normal in stature, and she is now, fully grown, just 3ft 11ins.

Danielle says she doesn’t like going out alone anymore: ‘I’ve had people grabbing my neck, just holding it – it’s really strange. ‘I don’t know what goes on in some people’s heads. ‘I would be out with a group and some drunk lads would approach.

‘Sometimes they will ask if they can take a photo or lift me up, sometimes the would just do it.

‘It usually gets stopped because I’m with a group and my friends can get protective. I don’t go out by myself because of that.

‘There has always been someone there to stop it thankfully. It’s like people will listen to my friends when they say no but not to me when I say it.’

She is speaking out to raise awareness, and hopefully change peoples’ behaviour She continued: ‘It’s not exactly common, but there are actors and athletes who have it.