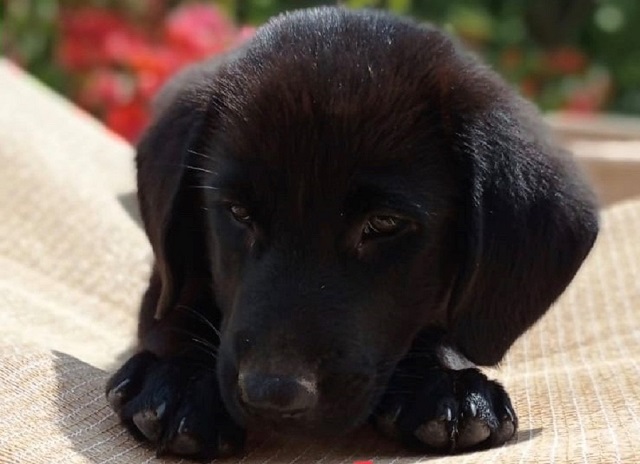 ADORABLE: One of the abandoned puppies in foster care and looking for a forever home CREDIT: PAWS-PATAS

PAWS-PATAS animal shelter says its “applause” to the Euro Weekly News for running a front page story in the Almeria edition and online which has helped prompt offers to foster abandoned dogs.
The charity’s PR and fundraising coordinator Chrissie Cremore said the EWN article highlighting PAWS-PATAS’s desperate need for foster homes for the record numbers of cats, kittens, dogs and puppies left at the shelter’s gates since the start of the pandemic produced results.
She reported that the shelter received emails from many people offering their assistance and to date a total of nine puppies and three dogs have been taken into care.


“This has been amazing, because the shelter could not deal with the volume of animals being abandoned, and because of the coronavirus situation volunteers have not been able to travel from Holland and at times there have been only three people cleaning, feeding and exercising 38 dogs”, Chrissie explained.
The situation became so dramatic she said that she and her other half Stuart Drury and fellow committee member Babs Willams had to “jump to the rescue.”
Babs, who assists in homing dogs in the UK, has been living at the shelter for the past two months, while Chrissie and Stuart have worked shifts with the dogs every day for the past five weeks.
PAWS-PATAS animal shelter President Vicky Hall has meanwhile taken on extra responsibility at the cattery.
Apart from the welcoming news about fosterers, local adoptions have also increased, Chrissie revealed.
It has been a case of “heartwarming, happy tears” she said to see four of the dogs leave the shelter for good and move to their “forever home” after many years.
The cattery has had three adoptions, and with over 50 cats and kittens still in their care the volunteers are busy following up on emails.

According to Chrissie the EWN article also generated offers from four more people to volunteer and help with the dogs and a further two with the cats.
“But please don’t think we can now relax”, Chrissie warned.
“PAWS-PATAS animal shelter is a constant merry-go-round, and due to other commitments, volunteers cannot always stay or give as much time as they wish. So please never think the animal charity has enough people to help.
“We constantly need assistance keeping the shelter grounds tidy, for DIY, volunteering in one of our four outlets situated in Mojacar, Turre and Las Buganvillas, fundraisers, drivers to collect volunteers from the airport or Vera bus station, and long-haul drivers for oversea homing in Holland and the UK.
As a specific example of what PAWS-PATAS animal shelter is constantly up against, Chrissie told EWN that just last week three boxes were left outside the shelter gates, one with an adult cat, one with two large kittens and one with two tiny kittens.
One of the smaller ones, now named Rascal, is partially sighted, possibly blind, but loves being with his best mate who was abandoned with him, and who is now named Sid.
It may take time to find the right home for both of them, Chrissie admits, but if 100 people would like to sponsor them and donated just €2 per week that would be a huge help, she pointed out, promising that PAWS-PATAS animal shelter would keep everyone updated with their progress, situation and would also email photographs.
For more information or donations, visit the PAWS-PATAS website: www.paws-patas.org.
Anyone wishing to help with the cats and dogs should start by emailing either [email protected] or [email protected].
We hope you enjoyed this article “PAWS-PATAS animal shelter credits EWN story for prompting offers to foster abandoned dogs”.
Euro Weekly News is delighted to continue be able to bring you a range of News that doesn’t cost you anything but your internet connection. Whether it’s Local Spanish News or International Entertainment News, we’ve got you covered!
For more Local Spanish News from Almeria, head over the page on the Euro Weekly News website.