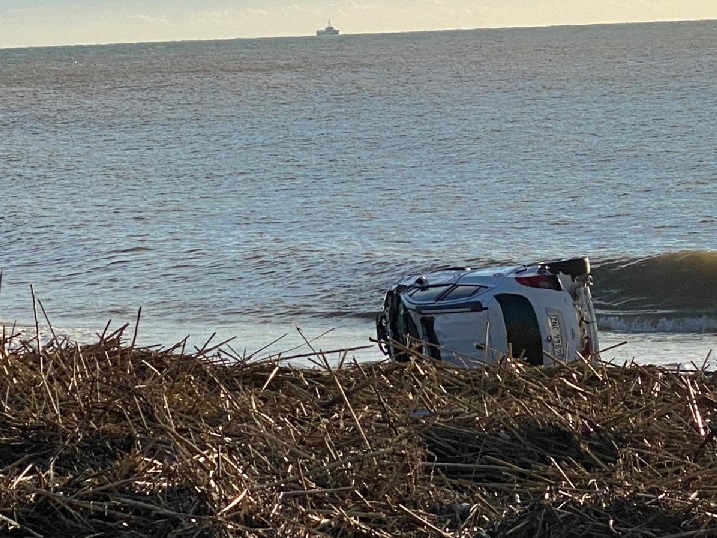 Storm Filomena Causes Serious Damage to the Beaches on Spain’s Costa del Sol.
From Nerja right down to Cadiz, beaches have been torn apart by damage caused by the relentless power of Storm Filomena. Millions of litres of rainwater drenched hundreds of kilometres of Spain’s southernmost beauty spots, delivering almost a fifth of the yearly total in just one day.


On Fuengirola beach, apart from tons of debris that was washed up, lay a car tipped onto its side. A Police launch hovered closely in observance possibly waiting for the owner to come and claim it, even worse perhaps the owner had been washed away to sea. At this present time, there is no information available regards the car but hopefully, someone has claimed it.
Two people from Mijas were killed in the early hours of Saturday morning as their car plunged into a fast-flowing river on the Fuengirola Mijas border. Specialist divers eventually recovered the bodies of a man and a woman. Two teenagers, also occupants of the car, were rescued alive and well.
The heavy rainfall left by the storm as it passed through the westernmost part of the Andalucían province has led to some thirty incidents dealt with by the emergency services in Marbella alone. The Chiringitoes that line the beaches were basically either wrecked or in some cases, parts of them washed out to sea. In Fuengirola, on Saturday, at least five were seen being repaired with the owners seen shaking their heads in despair over the cost of the damage. Thousands of euros worth of equipment was rendered useless and was thrown into the waiting skips on the paseo.
The strong waves also caused great damage to a beach bar on Artola beach, in the Las Chapas district. A wall also collapsed into the sea in Marbella, luckily, no-one was hurt. A massive clean-up operation is now underway that is expected to take a few weeks.