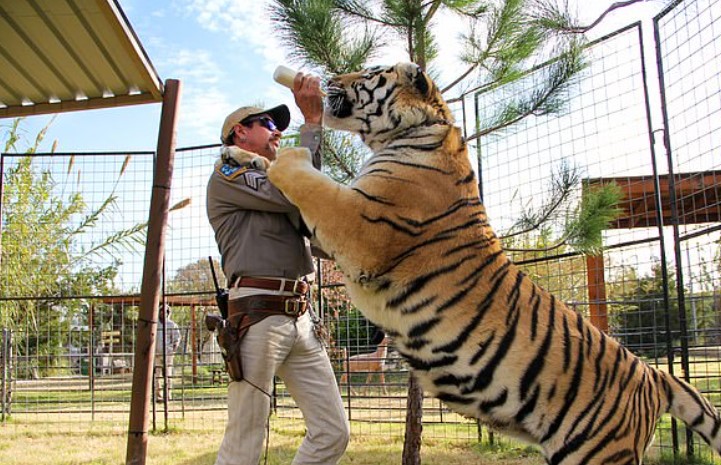 It has been reported that Ross Kemp and ITV producers are lining up a documentary along the lines of Tiger King – which shot Joe Exotic to fame when the series aired on Netflix – where Ross will meet the ‘Joe Exotics’ of the UK, who keep big cats.

A source for the show told The Sun, “Ross loves getting under the skin of gritty topics and interviewees. And given how big Tiger King was last year, this seems a good idea. No one has really delved into the lives of British Joe Exotics and what possesses them to keep these creatures in the way they do”.

They continued, “There are numerous examples of Brits having all sorts of animals, and this doc will look at some of the characters involved”.

Apparently, filming of the documentary, with the working title ‘Ross Kemp Meets Britain’s Tiger Kings’, already started towards the end of last year, and the 60-minute programme will be shown this year, but there is no confirmed date yet.

One of the people interviewed is reported to be 28-year-old Reece Oliver, a notorious big-cat owner, and former showjumper, who lives in the village of Strelley in Nottinghamshire, who keeps two African lions, and a puma in his back garden.

Mr Oliver fell foul of his neighbours last year after applying for permission to build a 400m2 enclosure behind his stables, which was to be used to house his show-jumping horses, but the real reason was to use it to keep his puma called Rogue, and two lion cubs called Rora and Rocky.

When his neighbours discovered what was going on, they objected that having so many predators less than 45 metres from the nearest house would be unsafe, but Reece erected a 12ft high fence and won the battle to keep his enclosure.

Thank you for taking the time to read this news article “Ross Kemp Meets UK Tiger Kings Type Documentary Being Made”.